Today was our 22nd wedding anniversary and James did our traditional brekkie of beans and egg on his nice home made toasted rolls. It was pouring with rain so we stayed put until around lunchtime when it eased off a bit. The forecast for the rest of the afternoon was sun and showers so we both put on our waterproof coats and trousers in anticipation knowing we had a few locks to do and sods law being the heavens would open in the middle of doing a lock and neither of us being able to do anything - so we were prepared.

We passed through the first two locks with all being well, huge group of teenagers went by all wearing t-shirts or little summer dresses, I felt very overdressed in my jumper, fleece and full waterproofs. By the time we finished the third lock the rain started so we were both glad to have gone out prepared. The fourth and fifth locks were done in torrential rain, leaving James paddling on the back deck where the drain holes couldn't cope with the amount of water.


Then it was the home straight to our mooring in Chester with the rain easing just a bit, we stopped just before bridge 123c.

Not many photos today there was far too much rain to keep getting the camera out.

We hadn't intended moving on today as heavy rain was forecast all day, but it seemed they were wrong. At about 11am the rain stopped and it brightened up, so off we went just as Solitude was passing. We shared our one and only lock with her again today and continued onto Christleton, passing by a long stretch of about a mile and a half of moored boats.

A quick walk around the village where there is a little shop so called in for some much needed bread and eggs.

It was back to LJ and the fire was lit as it was feeling quite chilly, not long after the rain returned again.

A nice sunny day was forecast so it was time to pull pins and continue our journey to Chester.

First off was the Bunbury staircase locks, no Bunbury shuffle for us but we did have a locking partner. A lady and her Jack Russell on nb Solitude.

After the staircase we stopped off to top up the water near Anglo Welsh, not sure if these are public water points but they were the new design ones, I counted nine of them and there was space to stop so we did. After filling with water we caught up with Solitude at the next lock, she was waiting for a locking partner and thought there was a hire boat behind us.

Next up was Beeston stone lock and it lived up to its name.

Then onward to Beeston Iron Lock and again lived up to its name. It was built on a new line in 1828 after a collapse, using diagonal iron plates as it is based on uneven sand. The sides have bowed in so although it's a broad lock there are notices to go through singularly, we went through first then I helped Solitude through, there are no lock ladders here so it would have been tough going for her.

We passed by these big ducklings, 17 of them in total I've never seen so many in one family, they then swan past us a bit later

We moored up just past bridge 107 near Beeston Castle and enjoyed lunch in the sun.

We stayed around the basin until after lunch most boats had left during the morning leaving just six of us, feeling quite empty, it started filling up again around lunchtime then we were off.

We were going to stop at Anglo Welsh in Trevor for diesel and pump out but it was so full of their hire boats in we decided not to, we would do it further on. Apparently Sunday is the best day to stop.

It was back over Pontcysyllte Aqueduct, no photos this time it was pouring with rain and back to the visitor moorings at Froncysyllte.

Froncysyllte to Ellesmere
13.25 miles and 2 locks

After a stroll into Trevor to find the Post Office, we found out it closed down some time ago,the only evidence that it even existed was a house named 'The Old Post Office', we set off with the weather being sunshine and showers, through Whitehouse tunnel, where we had to wait for a hotel boat to come through and then onto Chirk tunnel and Chirk Aqueduct, which were both clear and back into England.


Just passed the tunnel and through Chirk James spotted 'Smile and Wave' and on the towpath Heather and Mike, who were smiling and waving. There was a space on the visitor moorings so we pulled in to say hello. It was lovely to meet you both and have a chat. The rain came again so we continued on our way going straight on at Frankton Junction, we had to get to Ellesmere so unfortunately the Montgomery will have to wait, it's another good reason to come this way again.

We turned down the Ellesmere Arm taking the last available space at the very end.

The next day the boat behind us left so we pulled LJ back to the space to get out of the way of the winding boats.


We had a wander round the town and up to The Mere, it was all very quiet but we had lovely sunshine between the showers. 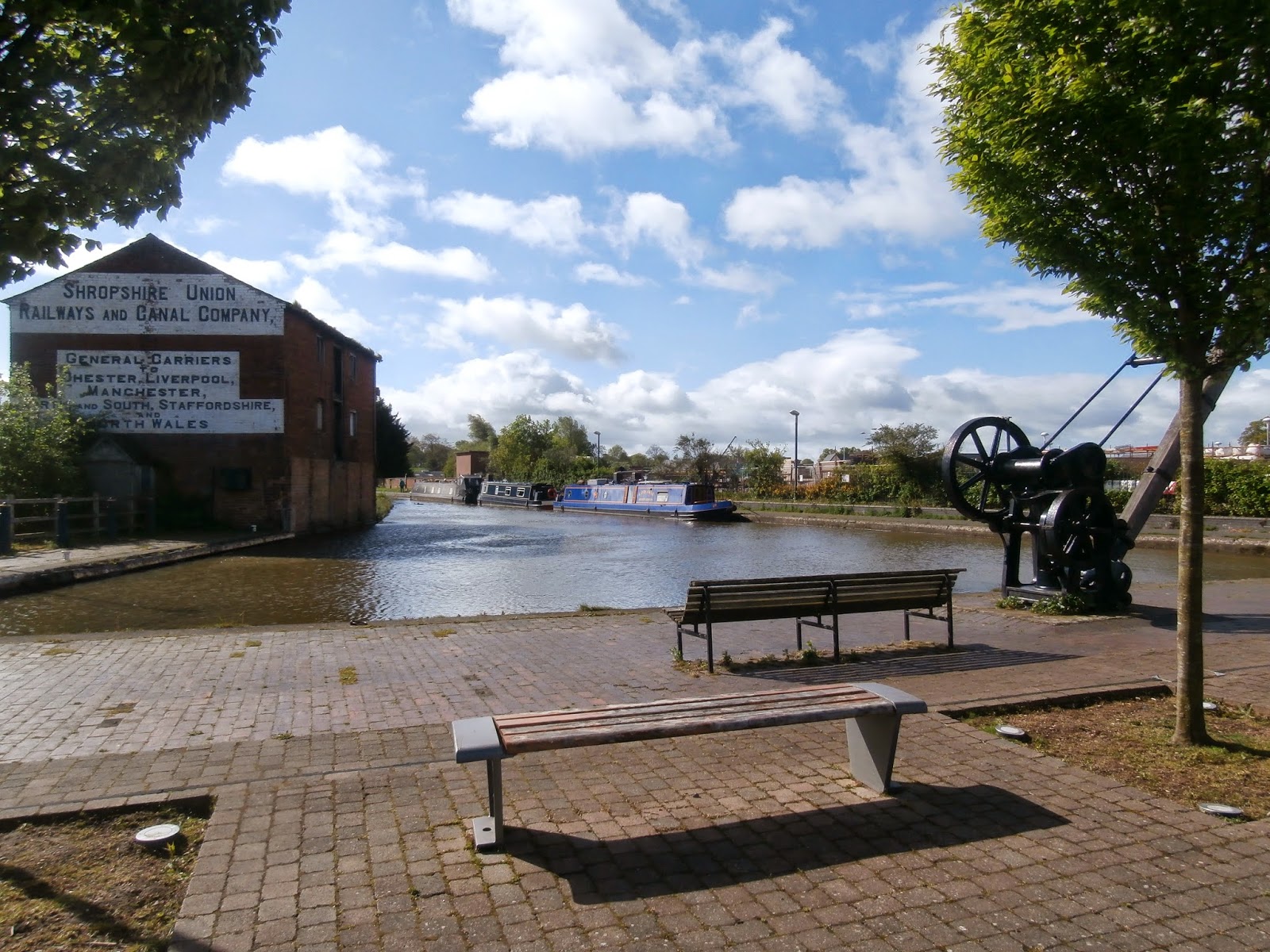 Just a very short trip today stopping for diesel and pump out at Blackwater Meadow Marina. Through Ellesmere Tunnel and stopping shortly after by the shore of Blake Mere.

We went out for a stroll hoping to walk around the Mere but unfortunately there was was no pathway round.

At about 5pm the fisherman descended on the lake ready for an all night session, rather them than me it keeps pouring down.

The fishermen packed up this morning and left at about 8am, they really must be dedicated it was pouring with rain most of the night.

We set off towards Whitchurch stopping after a mile or so at Cole Mere, this one is slightly bigger than Blake Mere and a nice walk of just over a mile and a half around it.

Just back through the four lift bridges today, it was very cloudy with showers but luckily not too many, we stopped after the Whitchurch  Arm about half a mile from the Grindley Brook locks.


Whitchurch to Quoisley
3 miles and 9 locks

First a stop at one of the four water points at Whitchurch before heading down the Grindley Brook staircase lock. There was a bit of a wait we were the middle of five who went down, it was only whilst we were in the bottom lock that someone was waiting to come up. It got quite a bit congested between the bottom staircase lock and the next single lock, one waiting for the staircase, one waiting for the next lock and one coming up, then we arrived shortly to be followed by another two, with two more coming up the locks, slowly but surely it all worked out and one boat waiting replaced another waiting to go in the opposite direction.

We continued our journey not seeing much else around surprisingly and moored in a lovely spot after Quoisley lock and near Marbury.

First of a couple of lift bridges, and thanks to the guy at Wrenbury road lift bridge for your nice comments about the blog, I stupidly forgot to ask your name. After the bridges it was time for tea and toast for brekkie on the move, i went down and started the kettle boiling and put the grill on, only for the power to go again, problems with the prop gen which runs our electric hob and oven, it cost us £1800 to sort the problem two years ago so we are probably going to have some major changes in the cooking department!! So that left us with brekkie of bread and jam and water instead.

The lift bridges were followed by a few locks, firstly the Baddiley flight of three, where we caught up with Heather and Mike again on Smile and Wave. We met a lovely family hiring an Anglo Welsh boat who were out for the week enjoying the glorious weather and a couple on a small hire boat out on their first trip having walked along the canal for years.

We stopped off for a lunch break in Burland and then on through the Hurleston lock flight with a very helpful lockie and left turn at the junction back onto the Shropshire Union heading north for Chester. Stopping near Barbridge  outside The Olde Barbridge Inn.

Just another short hop today to get us away from civilisation and back out in the open countryside, we stopped just after bridge 104 near Calveley and before the Bunbury staircase locks. I wonder if we will do the Bunbury shuffle when we go down.

Well that finally brings the blog up to date again at last, we have enjoyed the Llangollen canal and intend to return, well we still have the Montgomery to do.