We were in Braunston at the beginning of October for the Freaky Friday event at Midland Chandlers, another fairly large purchase was made, this time an oven, we had a very last minute change of plan for the hob, it was actually at the checkout we finally made the decision to get the one I liked at IKEA, a bit more expensive but we'll only be doing it once. We spent our money early in the day then moved LJ over to their moorings early evening to load the oven onboard, James wheeled the box down and then we realised it wouldn't fit through the front door, so it was unpacked then only just fitted through, we repacked it onboard as it would be a couple of weeks before fitting.

To help us get over the shock of parting with our money we made our way to the Boathouse to meet up with Dave and Allison Free Spirit as they happened to also be in Braunston too. We had a fantastic evening and look forward to meeting up again soon.

Saturday morning it was an early start from the chandlers as we decided to take LJ to Coventry IKEA rather than getting the train from Rugby. So back through Hillmorton Locks again, this time the left hand of two top locks was closed for repair,

Then onto All Oaks Wood for the night. Another early start and the misty morning soon cleared and we made it all the way to Coventry Basin, where we moored up and walked the half mile or so from the basin to IKEA, and made our hob purchase. We stayed a couple of days and visited the Transport Museum again and also Coventry Cathedral, which was destroyed during the second world war.

We made our way back to Hawkesbury Junction as Mum was coming up for a quick visit. A few days later we were off  through a very misty All Oaks Wood for a couple of days stop in Rugby again before making our way to Lime Farm Marina for alterations on LJ to begin. 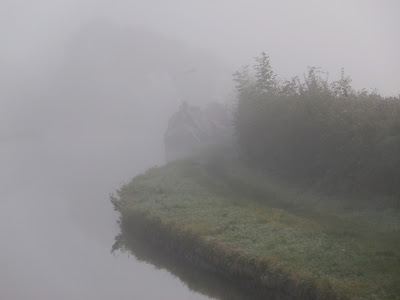 On the way we were lucky enough to be in the right place at the right time, just as CRT contractors were felling an Ash tree, the guys there very kindly let us help ourselves to the branches.

We stopped off just outside Lime Farm to get the wood chopped before John started the work. We decided it would be best if we left him too it for a while so we headed to Mums for a week or so and managed to get bargain train tickets from Rugby to Mortimer, a change in London then again in Reading £20 each to get there but only £10 each to return, other fares were £79 each one way! I've been getting tips from Jess for getting cheap fares.

We're back on LJ now and a couple of familiar faces (and boats) have passed by Tom and Jan, Waiouru and Geoff and Jane, LJ's previous owners. We'll be here a few more days as work is nearly done then will be on our way again.

Posted by Debbie at Wednesday, November 12, 2014 No comments: