We haven't covered many canal miles since the last blog but we have been keeping busy.

We had a very brief trip from Tipton on the train to Coventry via Birmingham. I've had my eye on a few things from Hobbycraft to spend my birthday money on, the easiest to get to is the one in Coventry, I know it is right by the station. There is one in Wolverhampton but have never been there and as we had to change trains in Birmingham we could get to the NBTA (boaters) meeting. The meeting was held in The Victoria pub which is an old traditional pub hidden away behind the Alexandra Theatre. I don't agree with everything that was being said but they did give some useful information and we finally got to briefly meet Maffi.

The most exciting news though is that after five years of being without a dog we have finally found a boating doggy. He is only five weeks old so it will be a few more weeks until we can introduce him to his new life aboard Lois Jane. Dudley is a Patterdale Terrier and Black Country born and bred. 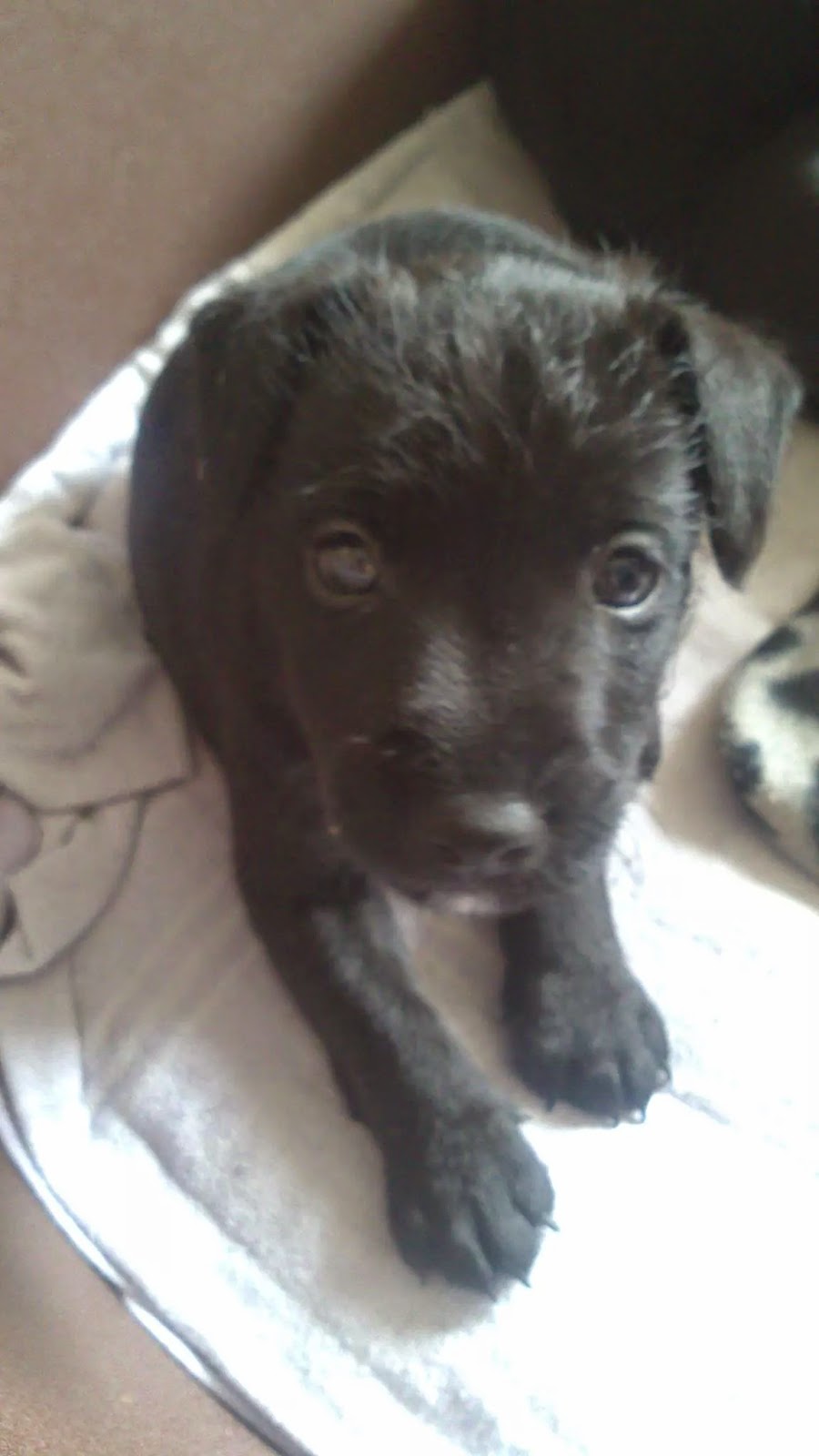 We moved from the visitor moorings at Tipton back round to the Black Country Museum where the moorings there were completely empty so we had the place to ourselves behind the locked (BW key) gates. We stayed there for a couple of days and had really lovely weather although still a little cold. James managed to get a few more pens done.

There is a small area by the side of the facilities block which had started to be cleared, the morning after our arrival a minibus arrived with the party doing the clearing, there were six people on the Community Payback Scheme along with their supervisor. The minibus arrived about 9.30 and after half an hour or so in the bus they wandered down to the site stood around before starting to do a bit of clearing, stopping for ciggys or looking at their phones, then it was a tea break so back to sitting in the bus, a bit more work, then lunch. By 3.30 they had packed up and gone. Couldn't really see much in the way of 'Community Payback' going on, especially as its private land and only visitors to the attractions can see it. Compared to what the 'Friends of Tipton' achieve it was a very poor effort.

We were soon on our way back into Birmingham, Jess is visiting from Poole and her train arrives at New Street, so easier for us to meet her there rather than changing trains.

We went a slightly different route going along the Old Mainline then turning left down the Gower Branch. There is a staircase lock there followed by a single normal lock. I had jumped off at a bridge hole and made my way ahead of James and LJ to get the staircase lock set. When I got there the top lock of the staircase was completely empty. It was amazing to see as we could see all the culverts which are normally underwater. Once filled all was OK, I think its just the gates leak very Bradley and it seems the lock continued to empty down one of the culverts, as it probably isn't used very much it eventually empties. We were then back on the New Mainline for the remainder of the journey. 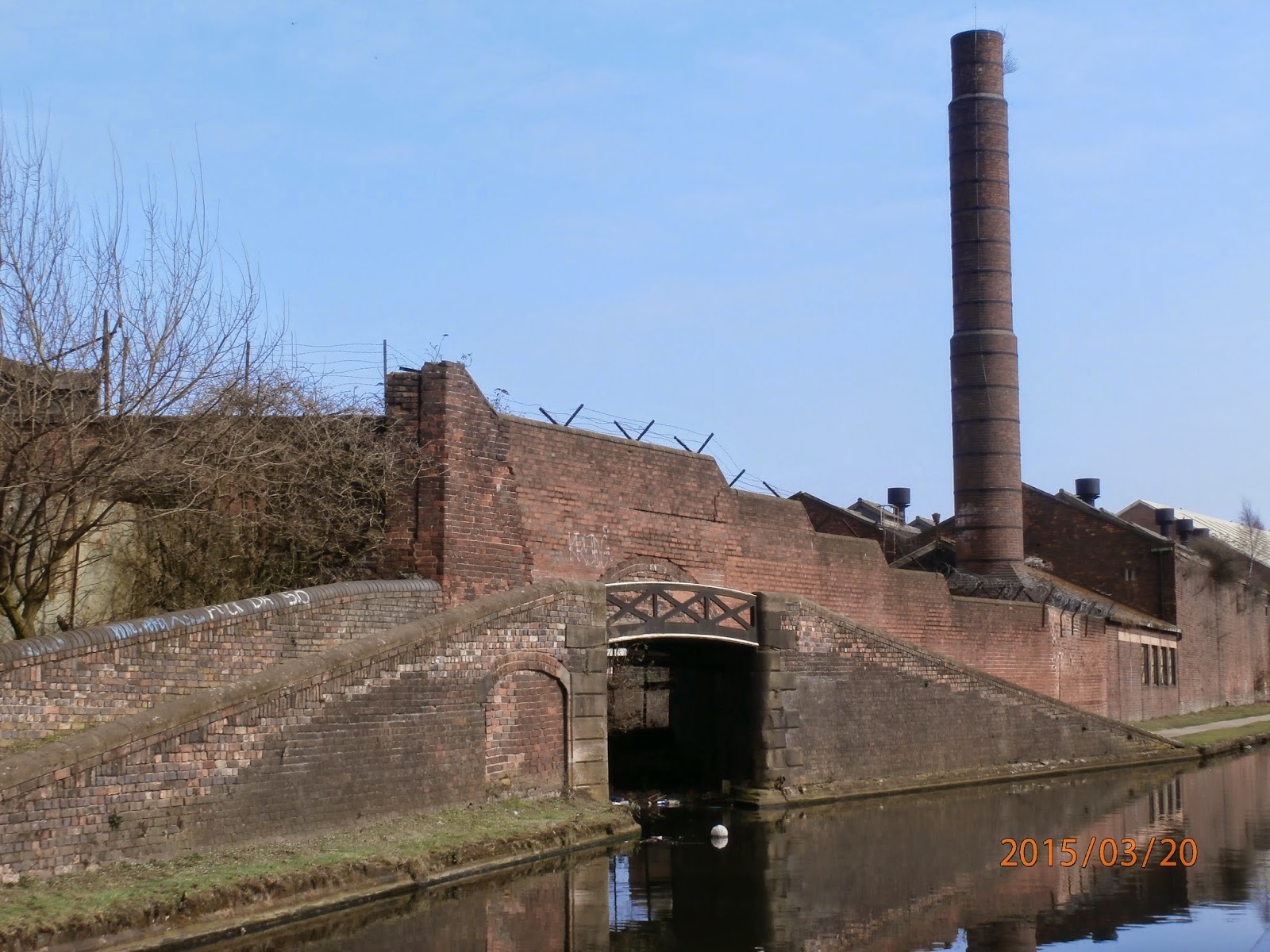 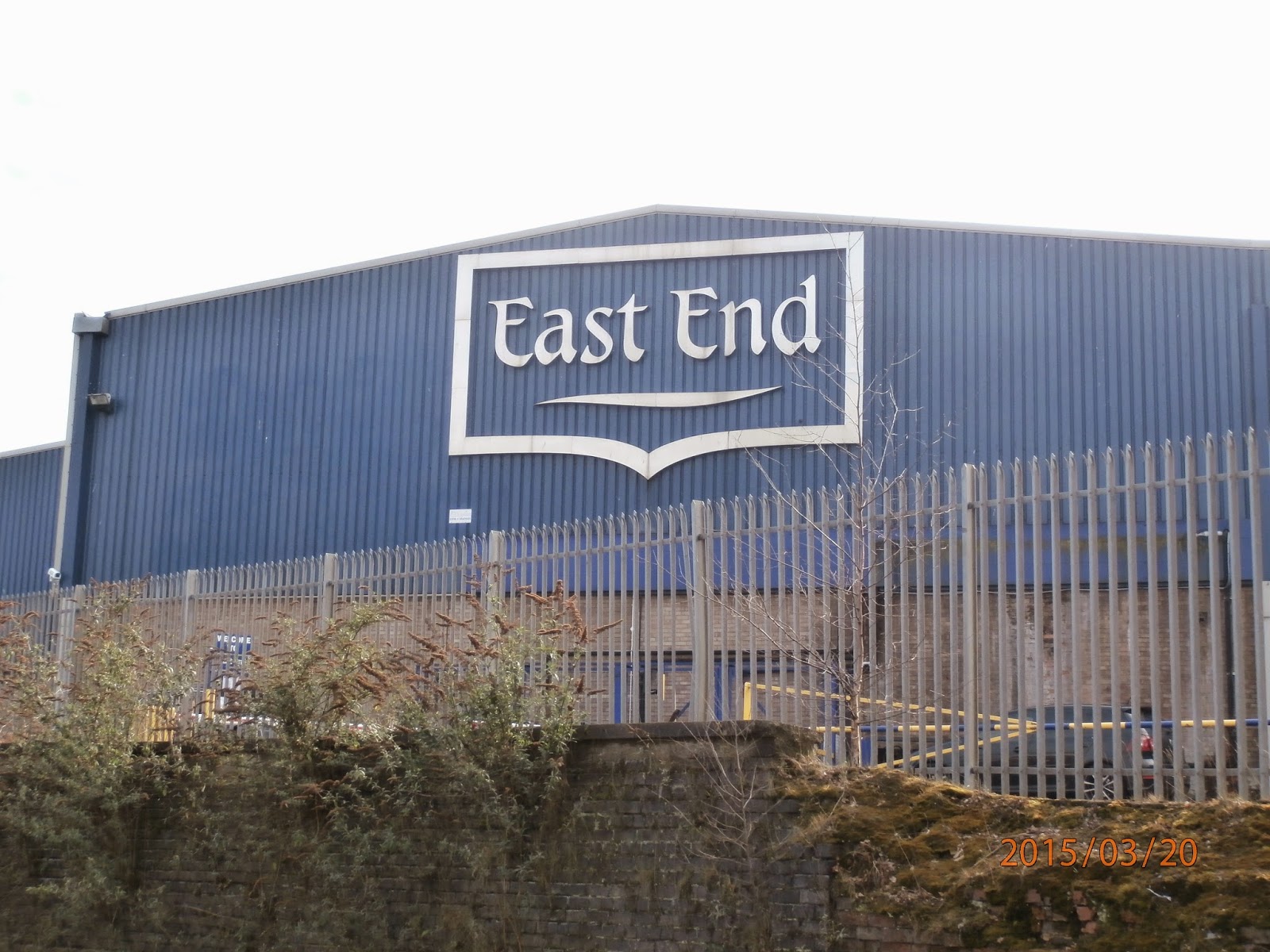 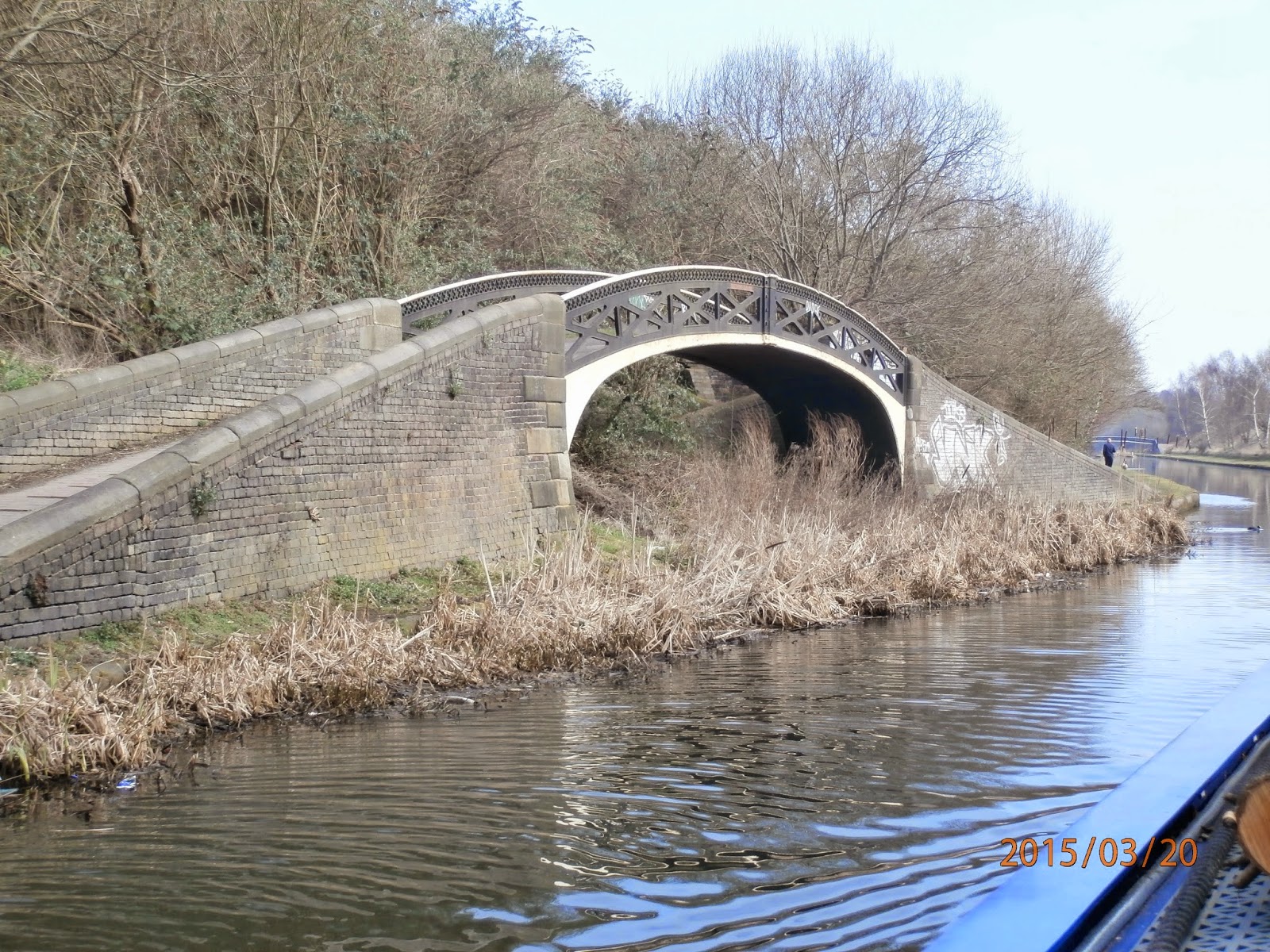 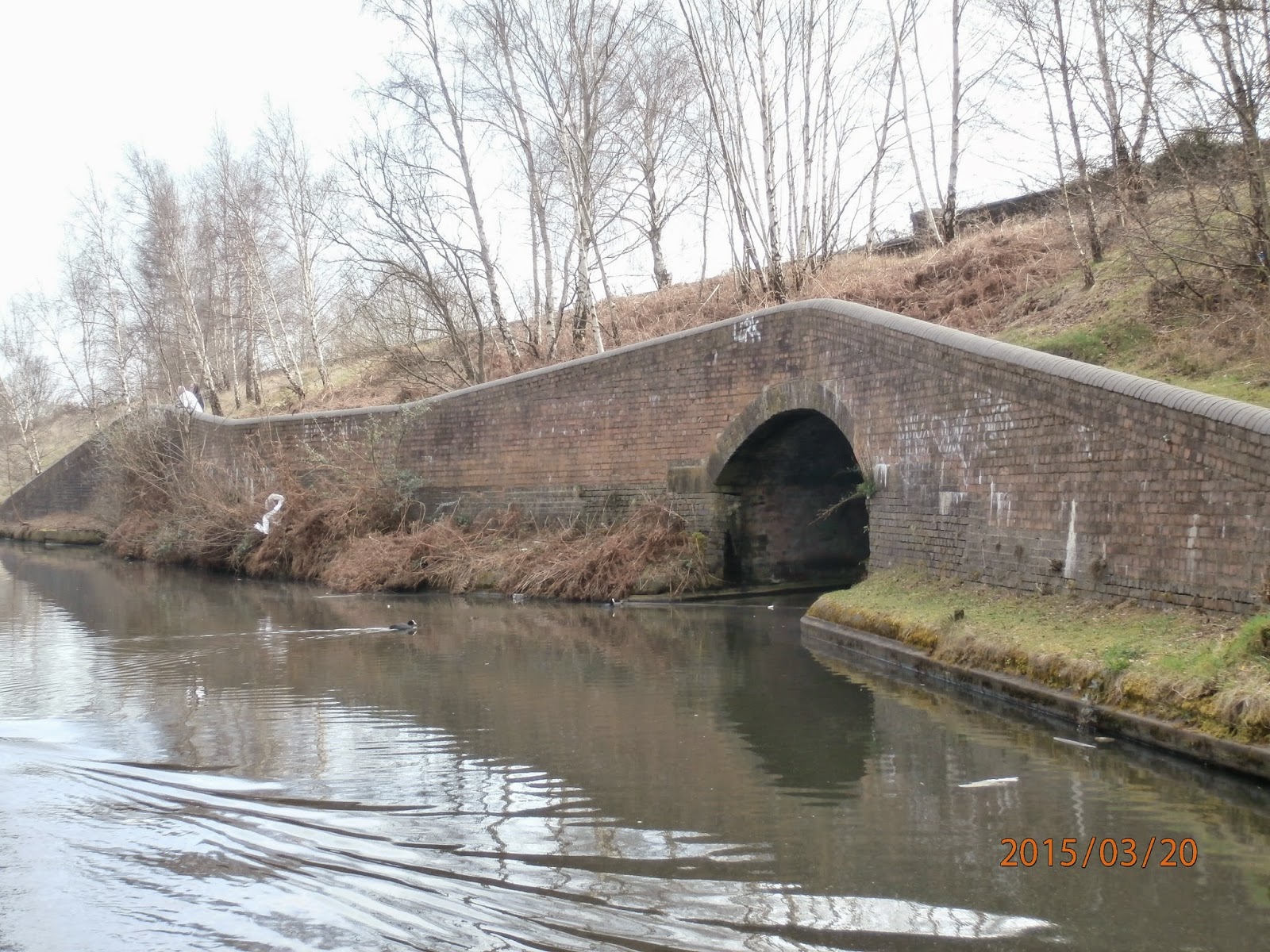 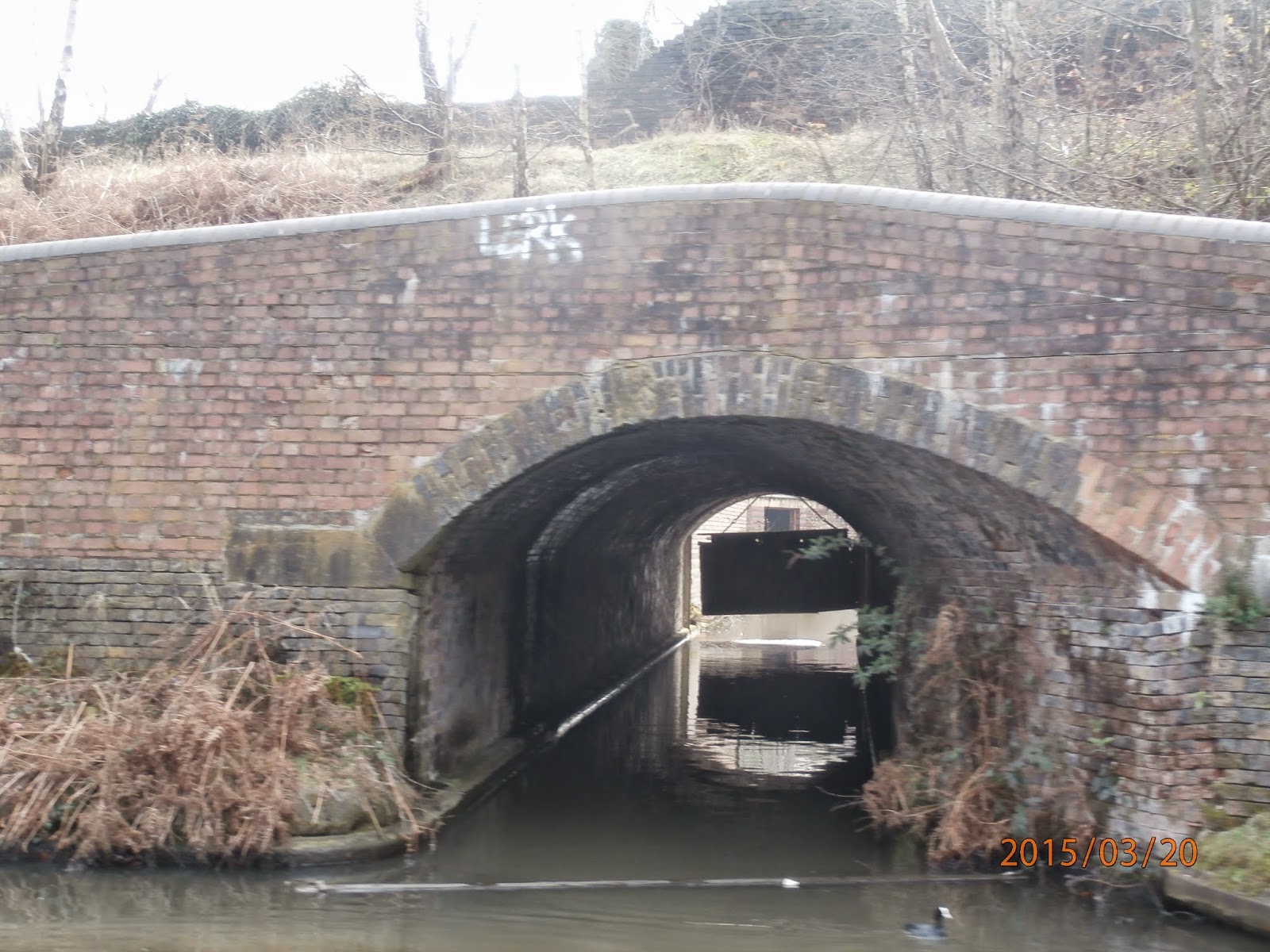 On Saturday morning we went for a stroll round Edgbaston Reservoir, having never been there before. It really is a lovely place and we spent time watching the rowing club launching their boats - are they even called boats? They didn't look very comfy either.

We were just coming to the end of our walk and I spotted a Patterdale, getting excited I pointed it out to James, who being very observant noticed the other two dogs, (a Poodle and a PatterPoo) matched the description of the dogs Matt's mum had. I was working with Matt in Coventry and he had spoken of his mum who lived in Birmingham and the dogs. I went up and randomly asked her 'are you Matt's mum?' It turns out she was and luckily Matt had mentioned me to her too. So on Sunday Rebekah came over to the boat for a visit and we spent a couple of great hours chatting, so a new found friend who we will definitely catch up with again when back in Birmingham. 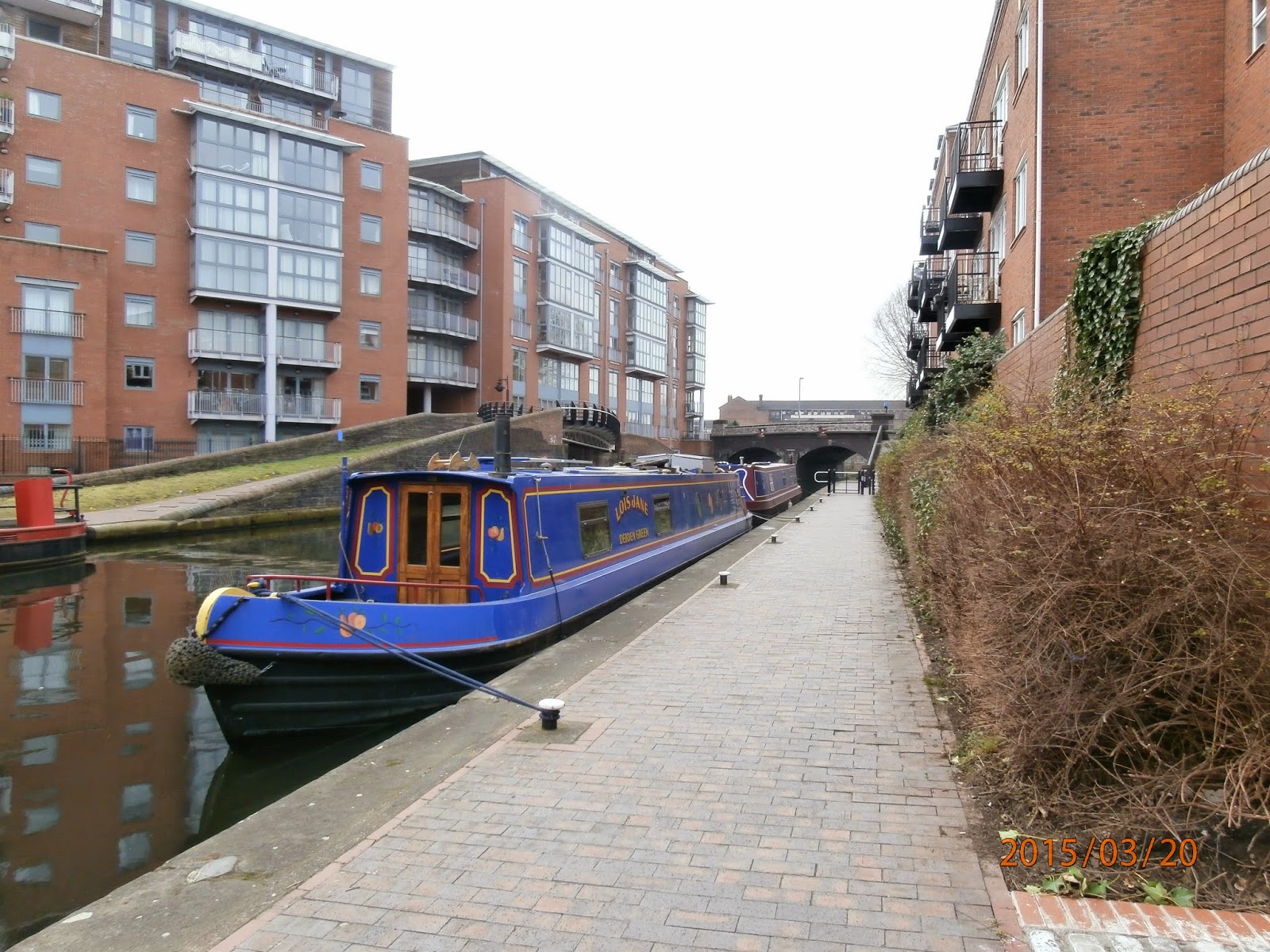 After briefly moving to the opposite moorings to sort our other roof box, we set off for Netherton Tunnel which was only a short distance away. This tunnel has a tow path both sides and is double width so boats can pass and much more headroom than Gosty Hill Tunnel yesterday, but also it is much longer at nearly two miles.

After what seemed an age we emerged into the brightness the other side of the high hill it goes through, and at the junction it was a left turn onto the New Mainline.  I went in and sorted a a bit of brunch, along with getting dinner slow cooking on the stove, before we got to the three Tipton Locks. We flew up these, a coal boat arrived as we were going up the first and we didn't want to hold them up.

We moored up at the end of the visitor moorings in Tipton, which are quite busy, just before The Fountain Inn. 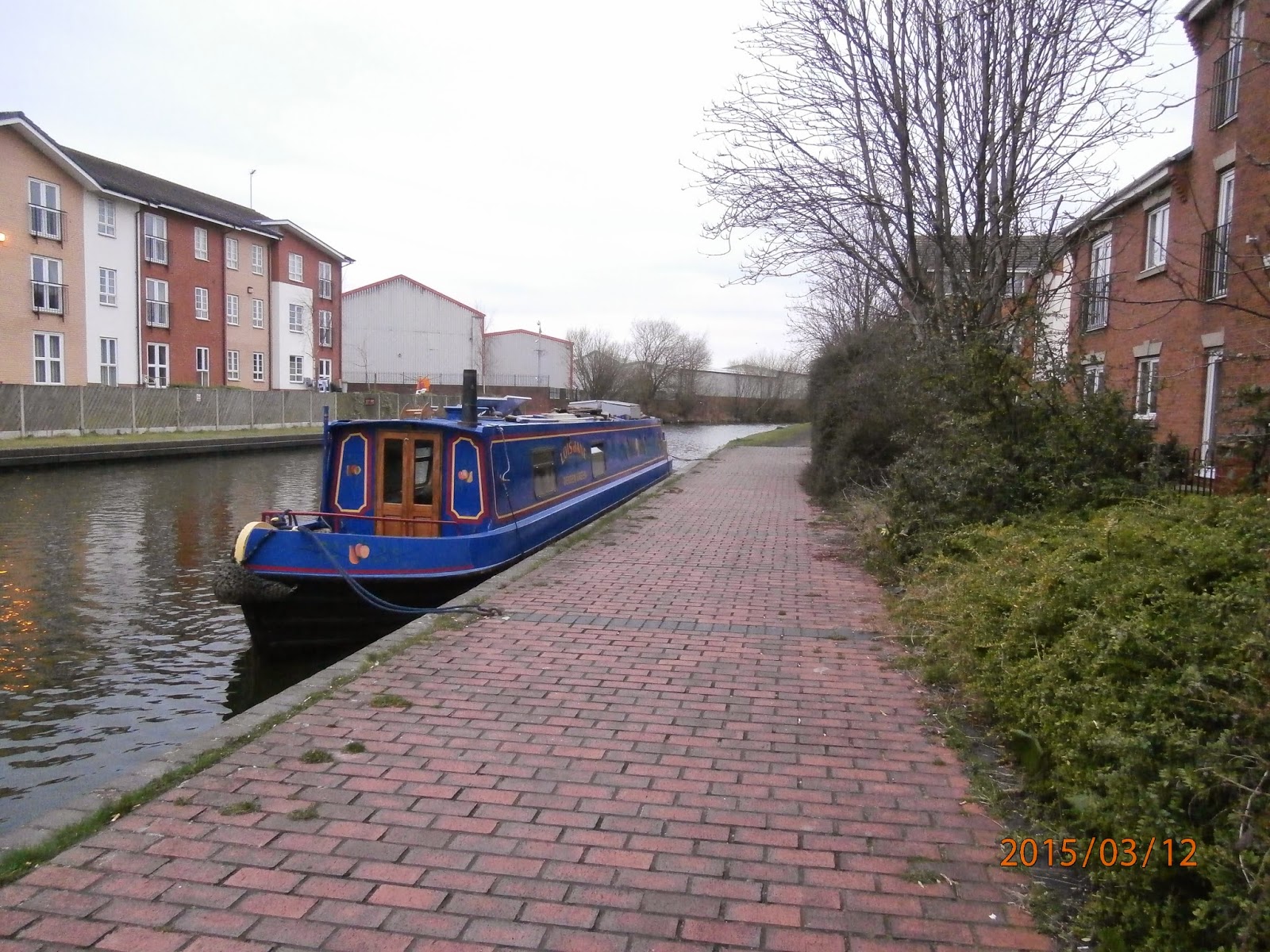 Today we had a trip down to Hawne Basin to top up with diesel and replace our empty gas bottle.

This part of the canal is very shallow in places but it turned out to be an incredibly interesting journey as we saw Roy Martin along the way, he recognised the boat and James from some Facebook posts he had put on about our journey up the Stourbridge locks. Roy was telling us some of the history of the BCN and the changes that have happened over the years, I could have listened to him for hours. This part of the canal is now a dead end terminating at Hawne Basin but in the past it continued on and you could get to Selly Oak. The long tunnel connecting the two had collapsed and was never repaired therefore cutting off the through route. He also told us how busy it used to be with all the various wharfs and work boats.

We left him at the entrance to Gosty Hill Tunnel, we had removed our roof boxes as we knew it was low in places and both them and the solar panels wouldn't have made it through.

Once we arrived we did the sharp right turned under the bridge and just managed to get through without hitting, again very low and very narrow. We made it over to the services wharf where we were assisted to the side.

We exchanged our gas bottle and with diesel at 53p per litre James squeezed as much as possible into the tank. So we were quite surprised with our bill at just over £1,599,000, James hadn't realised until he put his PIN in but it was quickly cancelled and the correct amount entered. Some how I don't think our bank would have authorised that transaction anyway. We had a good journey back to Windmill End put the boxes and solar panels back in place on the roof and are ready to continue onwards tomorrow.

Hawne Basin is a great place and a great journey with lovely, friendly and helpful people when you get there, definately worth a visit. 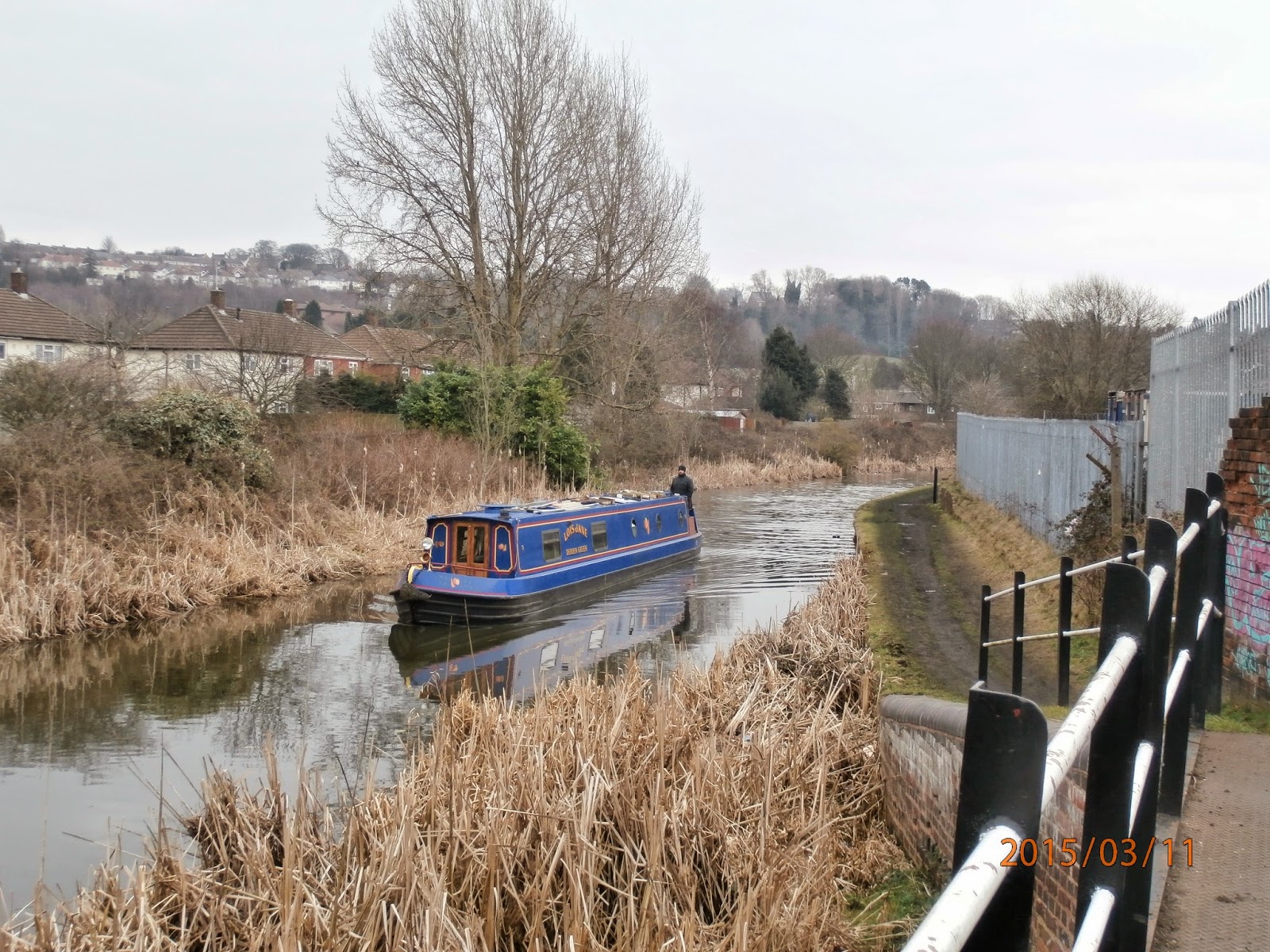 Saturday was another lovely Spring day, James set up his lathe and got on with some turning whilst I did some baking ready for our visitors on Sunday.

Unfortunately Sunday's weather wasn't quite as nice and in went up to the road to meet Mum and Lyn with an umbrella :( We did see a bit of the sun in the afternoon and had a lovely time with them, before they had to leave to head back to Berkshire.

On Monday we headed for the winding hole just past Kinver and began to re-trace our path. We managed to collect some wood on the way and did seven locks before stopping at the bottom of the Stourbridge flight.

Today we were up and off by 7am it was to be a busy day. We were straight into the 16 locks of the Stourbridge flight. 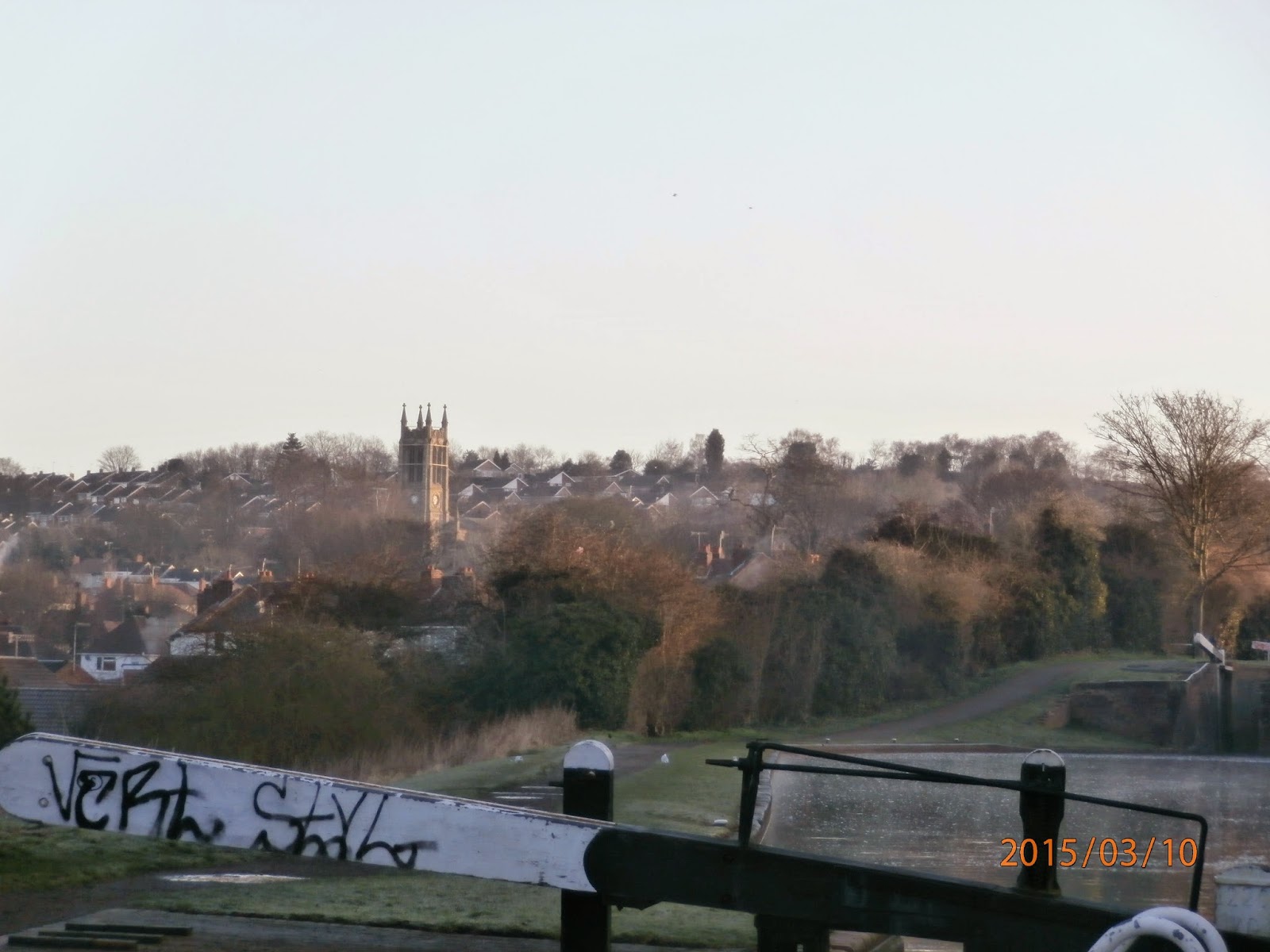 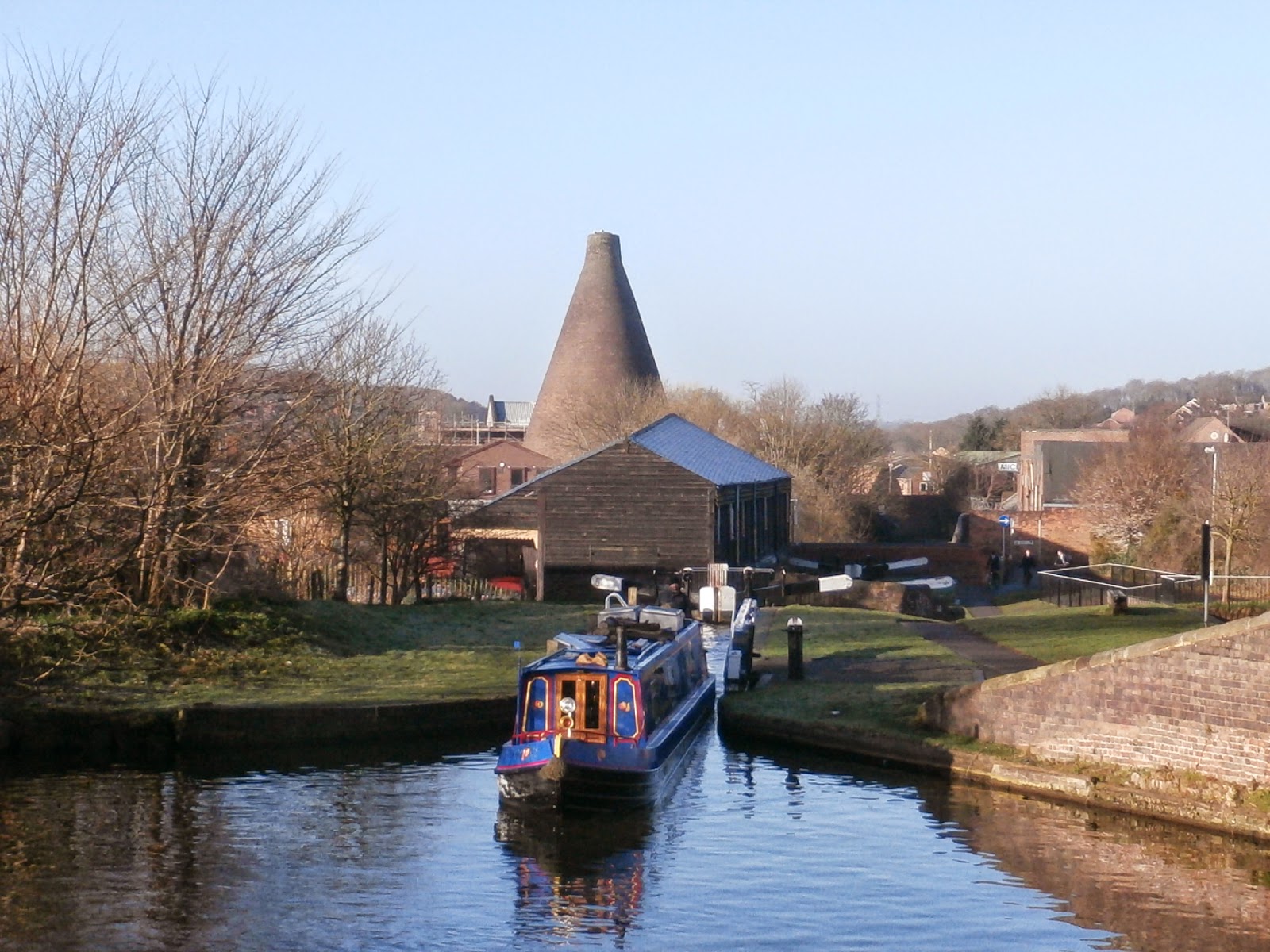 At the top I took over steering and James disappeared inside, it wasn't long before the delicious smell of bacon cooking wafted up. We actually met a boat coming the other day unfortunately of was on quite a sharp bend and I misjudged it, luckily a collision was avoided but James had to take over to get us off the side, think more practice is needed. We were soon on our way again and James reappeared with not only bacon but sausage,,mushrooms, egg and beans all served so we could eat on the move.

By the time we had finished we were at Delph Locks where we passed another boat coming down, we continued on past Merry Hill, where we considered shipping but decided to carry on up Blowers Green Lock and onto Windmill End/Bumble Hole.

Not content with doing 25 Locks today we thought we'd be organised and get the wood we had collected chopped and stored away.

We also needed to check the weed hatch, this time it was James' turn and it was not pleasant. Quite a bit of material looked like a pair of pants and loads of black material, the usual plastic bags, one being a JJB Sports one with the pull string and the worse bit was a fishermans lure with two hooks on it, good job he was careful as it would have been a nightmare if it had stabbed him.