How noisy can it get in a steel boat in a hailstorm?...

It was forecast on XC Weather  (great iphone app that shows quite a lot of detail) that it would be a day of sunshine and showers and high humidity that will bring thunder storms in the afternoon. We had a lot of wispy  low cloud with a solid dark grey bank above it. High up you could hear the rumble of thunder but no sign of the lightening. The rain was only coming down in spits and spots at this stage and the odd boater and dog walker was out and about. Deb was trying to get a top coat on the bilges whilst we have got some room to maneuver before the geni goes back in (probably Monday or Tuesday next week) but I could see that the cloud was darkening severely to the Southwest. I guessed that we had only a short while before it bucketed down so we closed the engine hatch and headed inside. I took a quick piccy to send to Jess (she is not too good with thunder bolts and lightening) but the rain soon turned into hail.

Swapping my phone for the video camera just in time to get some footage of the storm that lasted quite a while. Needless to say I am glad we were not out cruising in it as I think it could have caused some real damage. Its a couple of minute video that I tried to take through a crack in the front doors so sorry in advance for the funny angles and door frame close ups!

Now that's what I call a big hailstone. What are the chances of my nice new solar panels still working after that?

On the plus side my homemade hummus went down very well for lunch and we even managed to get a satellite signal back to watch the tennis!


Back to Braunston for the day...

This weekend is Braunston's 10th annual working and historic boats rally. Historic and working boats from all over the UK joined the festivities. The rally was held in the marina at Braunston which had more than enough room for all the marquees required for the numerous stalls and of course the beer tent.

The parade was started in earnest and would be heading from the marina to Braunston turn (under the two bridges) winding there before heading back to the first entrance of the marina, through the marina (at a very tight angle) and back out onto the cut and trying to make their way back to their mooring points - rather them than me. Some of these boats are rather precious as well, from the butty 'Raymond' that has recently been rescued and restored to 'Laplander' a pretty ancient steam powered icebreaker.

Email ThisBlogThis!Share to TwitterShare to FacebookShare to Pinterest
Labels: Braunston

Yes we're still at the marina in Hinckley, which is quite nice - it's the circumstances that aren't.  Richard the engineer didn't come bearing good news about the broken generator, but as always in these situations it never is good news.  Anyway basically the generator needs re-building and it is sourcing the part which is the hold up, Richard had managed to track it down but from America with a two week delivery time, then he will do whatever needs doing when he gets the part and then get back to us to fit it back on the engine.  And we will then have to part with a great deal of money!!

Anyway we are making the most of our time and the marina is in a very convenient location.  We have ventured into Hinckley itself twice, it's only about a mile and a half away, once on the bikes and the second time we had a stroll there, it's quite a good size town with all the usual high street shops.  About a mile the other way from the marina is very handy Aldi which we have visited a couple of times.  So in all a very convenient location.

As we are going to be here for a while we thought we'd better catch up with the Bongo again as it had been almost a month since we left it at Hawkesbury Junction.  So getting a route from Google Maps it was on the bikes for a 9.5 mile cycle to get it, hoping that after all this time it would still be there and start!!  We arrived at Hawkesbury in good time, and the first hurdle was over - it was still there!  So James took the keys (I must have checked I had the keys at least a dozen times before leaving - image all that way and forgetting the keys!!), he put the key in the ignition and turned - it fired up straight away, why I even doubted it I don't know because the two years we have had it, it has never let us down, I think it was the thought of a wasted journey.  So the Bongo is back with us at the marina.

We have also, at last, started our maintenance program in the time we have been here.  I started by clearing out the front two lockers and painting them out and the difference is amazing, and it will also protect against rust.  James has spent the last few days inside sanding down all the window surrounds and the roof light surrounds, lots of dust but well worth it, the first coat of varnish went on today and what a transformation - wish I had some before and after photos, must try to do that in future.  As it has been raining today I have spent the day at the sewing machine.  I was lucky enough the other day to 'be in the right place at the right time' and managed to get some off cuts of foam, these are to do some port hole bungs as the wooden ones we have do the job but not particularly well, these are instead of curtains or blinds on the circular windows in the bed and office area. So today I was making linings for them so at least we can use them until we find some material for the proper coverings.

I also spent a lot of yesterday down the engine bay getting the water out yet again, we have finally discovered how the water was getting in which is actually down through the pumps as these are plumbed into the drainage holes so with a very short term solution the overnight rain ended up in strategically placed buckets rather than in the bottom of the engine bay.  I have already had a few comments from people on our pontoon about how much time I have spent 'down the hole'.  Am I becoming obsessed with water in my bilges???

Pip arrived nice and early yesterday morning, closely followed by a front that changed the drizzle to rain. Not as heavy or persistent as was forecast but rain none the less and without a break. Of course we had the fire going for our morning brew and toast so LJ was cosy and warm. We didn't have much to offer our visitor to go with a cuppa so another batch of welsh-cakes was soon on the go. Lunch soon drifted by and I started to make some homemade crumpets for the next days breakfast. It's something I have been meaning to try for a while as when ever we buy a packet they always seem to go out of date before we actually eat them. I think this post is going to continue on the 'rainy day = foodie theme' kind of thing. The crumpets were very easy to make but cooking on the stove was a bit tricky. The BBQ griddle I was using is just too big to get a constant even heat when it's on the stove, better would be to use the BBQ (rain put paid to that idea) or use the hob (broken generated put paid to that idea as well). They were ok, definitely identifiable as crumpets but a bit doughy (hmm can you buy part baked crumpets?) Once Deb and I had fought over who was using the square foot of awkward stove space I started sorting dinner. I had declined another cuppa and welsh-cake trying to leave some room for dinner. Pip, and us, are curry fans and I am trying to get my favourite, a dansak, as good as the takeaway so I can teach deb to make it for my Friday night treat! Just in case it was going to be too spicy I made an aubergine and sweet potato korma as well. To go with it all deb had sorted some nice sticky rice and some homemade chapattis. Our last bottle of wine along with the heat of the curry and fire saw us through until the clock struck 'tomorrow'.

Only a short run to the Marina in Hinckley today and before berthing a much needed top up of diesel and a VERY much needed pump out of the loo tank.


Not too long after we had arrived Richard the geni engineer was at the gate. The generator wasn't the one he was expecting, this one is bigger unit made in America. He has worked on them before though and as soon as he had contorted himself down into the bowels of LJ he soon found a semi bunt out wire in a box of tricks that I hadn't opened. It looked a possible cause but he forewarned me that it 'may have taken something else out'. Replacing the dodgy connection didn't solve the problem so the whole unit and it's control boxes were extracted for further examination back at base. Tomorrow we should hear the answers to the three required questions.


I look forward to the call (not)

A couple of nice dry days has come just in time. We are still where we were but its great to get out and about and not have to worry about waterproofs all the time.

The wood collecting was hard work the day before. We had spotted a couple of large piles in a nearby field that was the result of a bit of thinning out alongside the canal. The field was quite badly flooded and the mud was clinging hard to our boots. The good sized pieces of wood were also well and truly buried by smaller branches and sticks. We cut away what we could but the piles were a good ten feet high and the wood was heavy with a week of rain and clods of clinging mud.

Yesterday we had a pleasant bike ride back up to the village of Stoke Golding before continuing via Dadlington to the British Waterways facilities at Sutton Wharf. As the weather was good and our water supplies getting low it seemed a good idea to use their showers rather than ours. At nine miles round trip it was about as far as I would like to go to have a shower without needing another one when I got back to base.

Pip is visiting us tomorrow (no doubt with more armfuls of post) which will be great and is stopping for her first 'overnighter' as well. Supplies were dwindling again, only the essentials, so another quick cycle to Hinckley was called for. The bike rides are getting noticeably quicker and the six miles to Morrison's did actually feel like a quick pop to the shops!

The interim times have been spent with both me and the solar panels soaking up the sun. It seems amazing that only a few weeks ago we were running the engine for a good three hours a day to keep the batteries charged and today we are having another day diesel free. 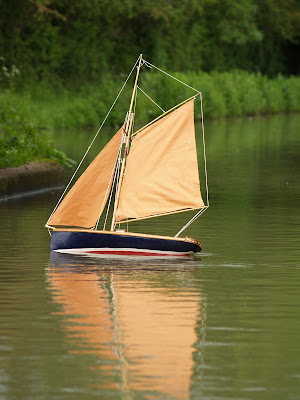 A video for Jess bellow, we've been trying to get her a clip of 'water skiing' ducklings for ages!