Stoke Bruerne to Weedon to Whilton

Just behind our mooring at Stoke Bruerne there was some kind of overflow or canal top up from the River Tove, when I looked our this morning there was water being pumped into the canal, I haven't seen this before when passing so not sure if it was because water levels were low in the canal or if it was a timed daily/weekly operation.

After taking Dudley for a quick stroll we set off round the corner to the bottom of the Stoke Bruerne Locks. Luckily as we got round the corner a boat just pulled off the water point so we had someone to share the locks with, it happen to be a boat we've been playing leap frog with for the last couple of days. It was slow going up the flight as we had a couple of long waits for boats coming down, we finally got to the top where our lock partners stopped at Stoke Bruerne. We continued on to the mouth of the tunnel and the Old Stables where Martin has set up the Ark Stained Glass Studio, he was open so we called in to say hello and put faces to names.

There was a boat stopped just in front of us who had problems with their tunnel light, he had been trying to get it working, as they had been there a while and had no joy they decided to use a mains lamp and one of them sit at the front holding it, they seemed quite pleased we were setting off at the same time and asked if we would like to go in front in case their system failed, luckily they were successful. We only passed two boats in the tunnel and made good progress through and it didn't seem as wet this time.

We continued on our lock free way passing a few unusual boats, here are some of them. 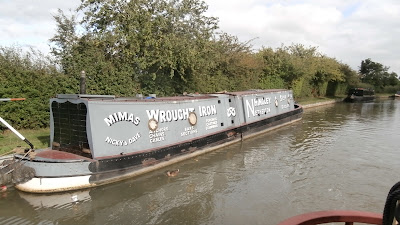 I got off and took Dudley for a walk it was turning out to be a much longer day, in both time and miles, than we usually do so he (and I) needed to stretch our legs.

I love this camp site right on the canal side, it's usually pretty empty when we have been by before, but that hasn't been in school holiday time, today there was quite a bit of activity there. 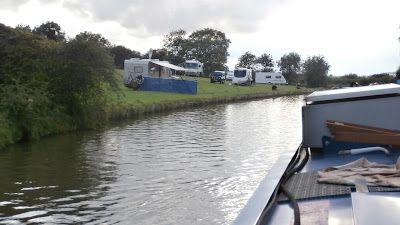 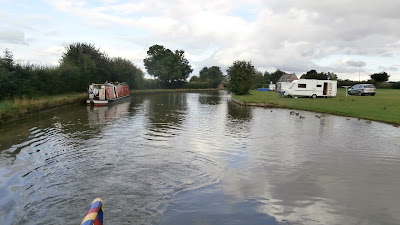 We finally arrived at Weedon, the moorings on the long straight were full so we went under the bridge and moored just after, really handy for the Indian restaurant we visited, also it was much quieter from the train which is just across the canal on the other moorings, there was a bit of traffic noise this morning but not as loud as the trains. There has been a Tesco Express opened in Weedon since we last stopped here a couple of years ago, they have converted the old tatty Globe Inn and it looks good now, it's quite big for an Express so we were able to top up the cupboards a bit before we left.

Today we did the short hop to the bottom of the Buckby flight outside Whilton Marina again, James needs to catch up on some pen making before we arrive in Brauston.

We arrived at Fenny Stratford early  and managed to successful pick up our ordered items from Halford and Argos. It's great that courier companies and the stores have got together it's ideal for us as we don't have a delivery address. We were left with a few days to organise ourselves before the festival on Sunday, although on Friday it was pretty much heavy rain all day.

I went for a bit of an explore with Dudley and came across Caldecotte Lake which was huge and so much going on for a Thursday evening. 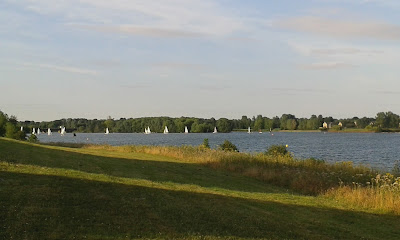 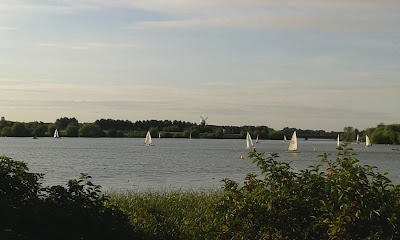 Sunday arrived and we had a little trip round the Fenny Poppers Festival area which was the High Street, lots of stalls were going up and the fair was setting up. Back at the canal it was all go as well with the traders setting up for the Canal Festival and a few stalls as well. We set up our displays and people starting arriving, we weren't expecting it to be too busy as it was the first canal festival to be held there and we weren't sure if many people would venture down from the High Street. Well I'm pleased to say we were wrong and we had a very busy and successful day, in fact our second best trading day to date. We even had a visit from the Mayor and Mayoress of Milton Keynes and they are now the happy owners of two pens.

In the evening the organiser Rosemary and her husband Paul had very kindly laid on a BBQ in their garden for all the trades as a way of saying thank you for our support. All we had to do was bring what we wanted to drink, we had a lovely evening and for once we ate properly after a busy trading day.

We were going to head off on Monday but were told there was an Ikea about a 10 minute walk and we wanted to get some more display frames so plans changed and we went to Ikea instead and left Fenny on Tuesday. We stopped at Campbell Park and managed to get a mooring on the park side.

Today we left in the lovely sunshine and did the journey through Cosgrove lock carrying on to the bottom of the Stoke Bruerne flight. It was a fairly quiet journey and would have been quieter if we hadn't seen all the Wyvern hire boats out.

Wow what a busy weekend and soooo many people. The organisers did a fantastic job and as Festival HQ was in front of us we could see and hear all the hard work going on throughout the weekend.

Friday evening Peter and Heather came round, complete with cider, wine and crisps and we sat on our back deck listening to the music from Blisworth Marina opposite. We had a lovely evening catching up.

Saturday we were up early and headed off to the Chapel for the Boaters Breakfast, again very well organised and a fantastic fry up that would keep us going for a while. We got back to LJ and started setting up our displays, it wasn't long before the bells rang at the church indicating that the festival was open. Dudley was on meeting and greeting duty as usual until it got too hot. Again we met lots of lovely people who have been following us on Facebook and many sales were made.

Sunday morning started cloudy but still warm but it wasn't long before the sun made an appearance but luckily it wasn't as hot as Saturday. There seemed to be more people around and at times the pathway got very congested. More sales were made and we had our busiest day to date, leaving our displays looking quite empty by the end of the day, not that I'm complaining.

During the weekend there were reports that the A43 was gridlocked due to the amount of people flooding to Blisworth. This has to be one of the best festivals around and it's free to visitors. Three distinct areas choc a bloc with things to do. A festival field full of entertainment, a village full of open gardens, breakfasts in chapels and cream teas in churches and to top it of rows of decorated historic and trading narrowboats. We had a fantastic time and received a warm welcome from the organisers, villagers and festival attendees (all 58,000 of them).

On Monday we set off just after 8am just after Kit and Mike had passed by, we didn't get far as there was a wide beam coming through the tunnel from Stoke Bruerne and we had to wait, good thing though there was also a widebeam in the queue ahead of us which meant that we wouldn't be passing anything in the tunnel. So after a delay we set off and shared the Stoke Bruerne locks with Kit and Mike, we continued on to Cosgrove passing through the lock and stopping at the bottom before the aqueduct.


Tuesday we continued our journey to Fenny Stratford as James had a DPD delivery to Halfords in Bletchley and I had a couple of Ebay items being delivered to Argos. We decided to moor up in our allocated spot for this weekends first ever Fenny Stratford Festival, so we would both get on with getting stocks of pens and cases made.

We stayed a few days in Bugbrooke, the only downside here is the noise from the Virgin trains as they hurtle by, but you do tend to get used to it. It's been quite a windy few days but luckily no rain which meant James could get on with a few more pens ready for the Blisworth Canal Festival.

I do like the walks around Bugbrooke, they are well signposted and the farmers do keep the footpaths very clear. They seem mostly crop fields here, the occasional one with sheep but no sign of cows, as much as I love cows I don't like crossing fields with them in.

We moved off yesterday with the wind quite strong which made it a bit tricky, we stopped at the facilities wharf at Gayton Junction, Olly on Queen Mauve passed by, a few minutes later he sent James a Facebook message saying he had spotted us but it was too windy to slow, I don't blame him we had fun and games reversing back out and on our way again.

Nick, the boat organiser for the Blisworth festival had told us roughly where our spot was and that they had marked them all out, we arrived and found it fairly easily. Nick popped over in the evening to introduce himself and say hello. So first impressions are nice, friendly and organised. I'm now just waiting for my Tesco delivery.

Yesterday Glen of Elite Furnishing turned up, did a final measure up, we re-checked the fabrics and the sofa has now been ordered. Only problem is we have to wait 6-8 weeks as they are made to order. Never mind, as the old saying goes ... Good things come to those who wait ...

This morning before we set off I took Dudley for his morning stroll back up to the locks, a hire boat had past us yesterday and gone up the locks at 9:20pm, it was almost dark and not a good time to be starting a flight, they had left the top gates open and due to leaky bottom gates the pound between 12 and 13 was very low, the lock was only half full and at times yesterday we had noticed water coming over the gates so a lot of water has been wasted from the pound. I closed the gates and walked to the next one, the level wasn't too bad here so the gates were obviously not leaking as much. I didn't go on any further as we wanted to be away early.


We passed a few boats on the move, a couple of them typically at bridge holes. We stopped off at one of James' timber suppliers who are actually just off the canal, so we had a nice stroll up there and a good look around. James was also after a particular wood which they didn't have in the shop so they went to their workshop and cut some for him, very helpful.

After a bit of lunch we continued the short way to Bugbrooke. The moorings opposite the pub were full so we stopped just after, there are only two other boats here, when we've been down this way before it has always really busy.