On Monday we sorted out our anchor as we were heading down to the River Weaver. First it was a stroll to the boat lift to book a slot, where the helpful receptionist got us booked in for 11:30am.

We went back to LJ and moved onto the holding moorings for the lift, we were booked for the next one. We had our safety briefing and then moved to the aqueduct across to the lift, once the gates to the canal were closed we could get into the lift caisson. Here one of the friendly and helpful operators, Dave, told us all about the history of the lift as we were waiting for a trip boat to get into the caisson at the bottom to come up. It wasn't long before we started our descent, it took around six minutes to get to the bottom passing the trip boat on its way up. It took a while for the gates to be opened allowing water to flood up to our caisson, the final gate was raised and we were released onto the River Weaver.

We turned left heading for Winsford, passing by the barge being emptied of dredged mud. We were soon approaching Northwich, where we stopped on the visitor moorings with the town being right beside us.


After a bit of lunch we continued on our way. We were asked to call the lock keepers prior to arrival at the locks so first up was Hunt's Lock where the very helpful lock keeper said he would set the lock and as we entered to grab the rope he lowered and attach our centre line to it and they would hold us to the side. There are two locks here really massive ones, or the one we were in which was still pretty big being much larger than the broad locks on the canals. All we had to do then was wait and we were soon at the top of the lock where the gates were opened for us and we were on our way with the lockie informing their colleagues at Vale Royal Lock we were on our way. Exactly the same process here, with again friendly and helpful lock keepers. We were soon at the Vale Royal moorings, which by the evening were nearly full.

We had an unexpected visit to Wales as James' grandad had been taken into hospital and at 97 it was a bit concerning. Enterprise in Northwich came and picked us up on Tuesday, as usual, they were brilliant and we were soon on our way in a brand new Fiesta with not even 200 miles on the clock. Our journey by road took us back to Chester, down through North Wales, across to Aberystwyth then following the coast down to Cardigan. All was going well until we reached our turnoff on the A44 across to Aberystwyth where the road was closed, the only alternative was, a mostly single track, road through the mountains adding nearly an hour to our journey. We later found out there had been a big accident on the A44 where sadly four people died. 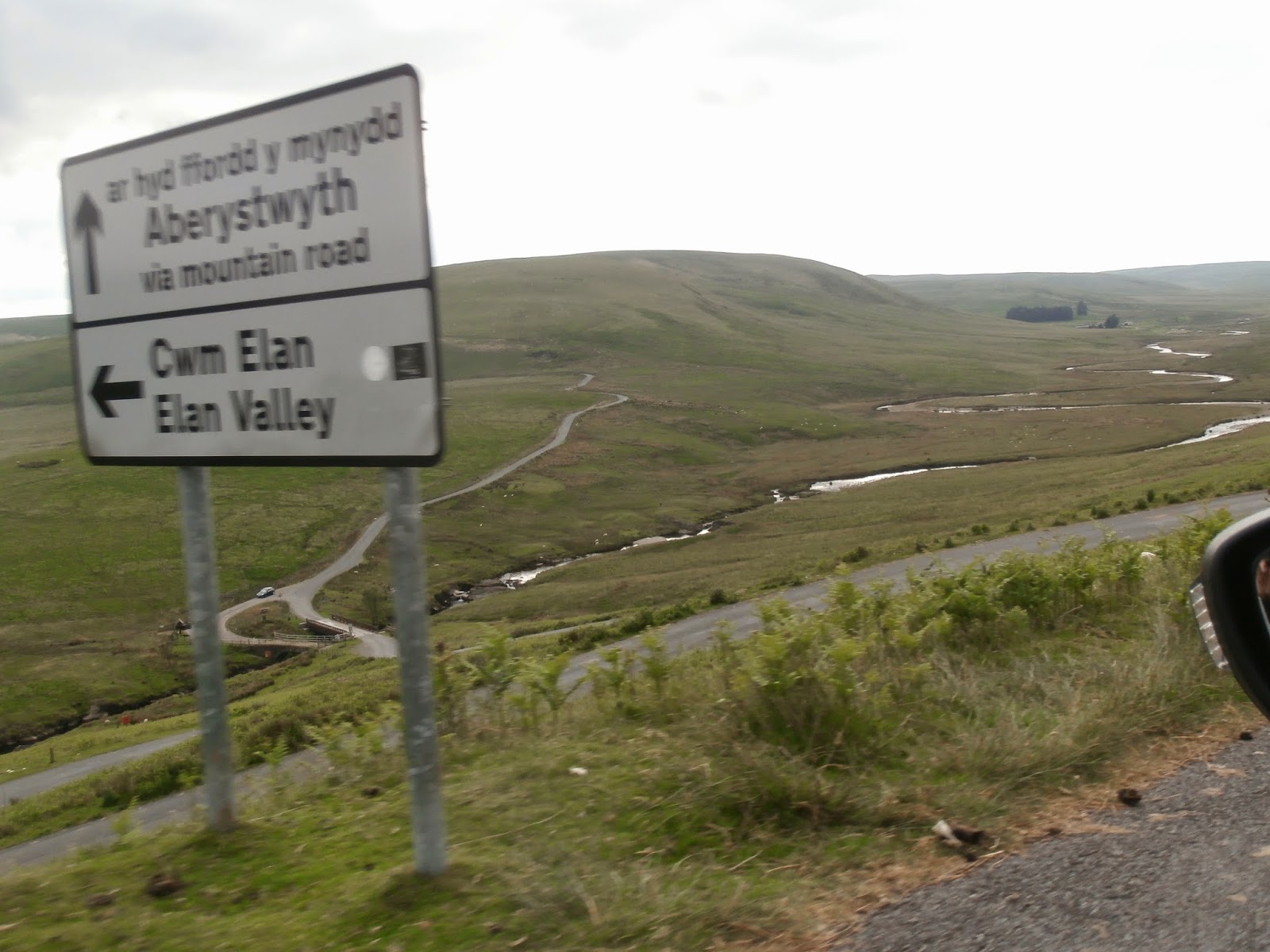 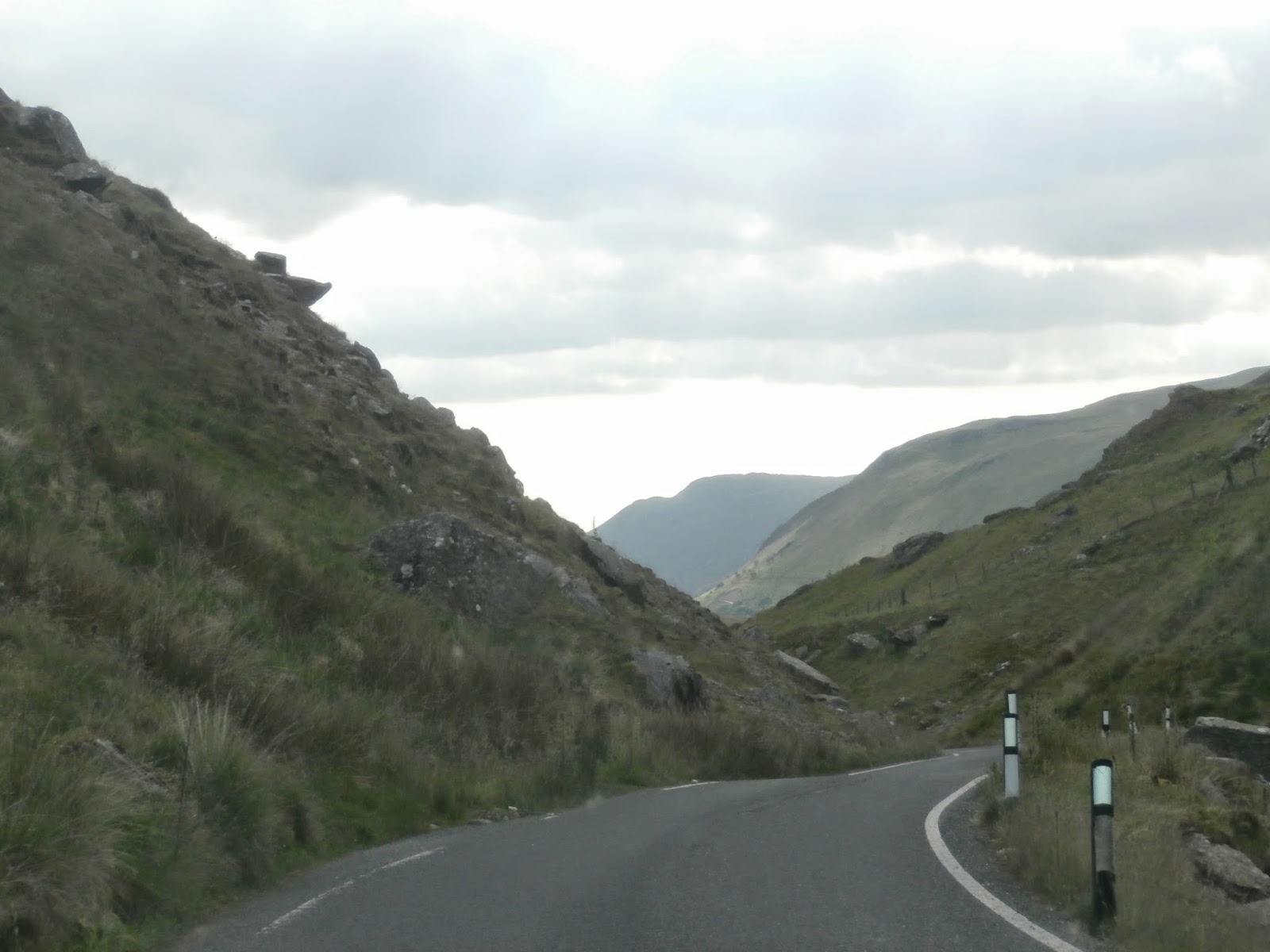 We went to visit Grandad on Wednesday, it is a bit of a trek to the hospital taking about 40 minutes each way. We found him sat up in his chair and a bit better than the previous day, on Thursday when we went he seemed to be making good progress. It will be a long recovery process and probably a good few weeks before he will be back home. We had a lovely time with Pam and Pete (James' Mum and Dad) and it was good to see them both again.

We got the car back to Enterprise on Friday and had a very lazy Saturday. We finally left Middlewich on Sunday and had a pleasant cruise with no locks do and not many other boats on the move, arriving in Anderton late afternoon.

Middlewich FAB and an Obit From Ade...

Of course there were other things going on in the main arena. Twenty one real ales and twelve ciders to chose from in the beer tent. Deb grabbed a seat and I went in for some ale. I settled on a pint of marked man, its what I'd be if I got Debs cider choice wrong. There were none of her usual favorites that I recognised. I asked the slightly confused by it all bar maid for something not too strong (it was just after five o'clock) and mediumish. She started by offering me a sample of the closest barrel to her, by half way through the second row of barrels I'd forgotten all about the first row, was no longer dying of thirst and had a craving for chips and curry sauce.

"Its been a weird f***ing week" was Ade Edmonson opening line before introducing his band the Bad Shepherds. Loosing his old friend of close on forty years, Rik Mayall, must have weighed heavily on his mind as well as how to approach headlining the main stage of the Middlewich 'Folk and Boat' festival.

The mood could have gone either way really, but we were all just happy Ade had not cancelled the gig. Would it be a morose, sad set or would we all be asked to stand for a minutes silence? We really shouldn't have worried. Toasting Rik with a bottle of red wine Ade interspersed excellent music with witty stories and utter side splitting piss taking. Everything from the night Vivian of the young ones was invented; to the pub with the pogoing proff with a pocket full of pens (he was the only one on the dance floor and as soon as the song was over he picked up all the pens that had leapt out of his tweed jacket pocket and said to the punk band, 'very good, well done'); to everyone laughing at one of Riks last photos of him taking his wife's fluffy white dog out for a walk. What a great evening.

The support acts were great too, a girl with a pleasant enough voice but a destroyed respiratory system due to a prolonged attack of hay fever was followed by the excellent Hat Fitz and Cara. Cara on drums and vocals belting out songs inspired from growing up alongside gypsies in north east Ireland with great slide guitar and powerful gravely singing from Hat Fitz; he's a kinda Oz version of Sea Sick Steve who sounds like he gargles every morning with whiskey and hob nails plucked out of the soles of dead men's boots - I'd gladly pay to see them again.

Apart from a couple of radio 2 hosted gigs/meetings, all other entertainment for the three day festival was free. Saturday night was another great night for the main stage and the 'Men They Couldn't Hang' brought cheers from the crowds who stamped spilt beer into the turf with songs of protest against wars and governments and the council who had told them to be silent by 11.00. It was a stark contrast to earlier that day with the morris dancers and nearly too many queens, princesses and attendants of the rose being crowned.

Of course this is the Folk and Boat festival and as well as a few display boats including rebuilt butty Saturn and the oldest wooden narrowboat (1850ish) Maria there were also quite a few traders taking part in the floating market both Saturday and Sunday. Jed was fast running out of his excellent chainsaw carved sculptures, and it was great to finally meet up with Barry and Sandra from the homebrew boat AreandAre (link)

The only slight downer on the whole weekend was that early on Saturday  another boat was sunk in a lock. As is more often than not the case, the back of the boat was caught on the cill. Luckily no one hurt or worse. The guy had borrowed it from a friend, sunk it and done a runner! With friends like that eh....

After a quick overnight stay we set off Sunday morning (8th June), arriving at Cholmondeston Lock with a queue both ways. I went off windlass in hand to help, there were three on the boat in front of us and they did nothing but moan how slow it all was but made no attempt to assist others. In fact on one boat coming up he approached the lock telling us to raise the paddles completely straight away to speed things up, not something the owner of the boat in the lock was prepared to do and held his ground and not be bullied into it, after all it was his boat in the lock he can operate how he feels safe to do so. Luckily there was no sign of Mr Impatient by the time we got to the next lock.

We continued winding our way towards Middlewich and stopped by bridge 26 to check things out in the town as the Middlewich Festival was on on 13-15 June and not being sure what was happening where.

On Tuesday 10th we made our way through the remaining two locks on the Middlewich Branch and turned left onto the Trent and Mersey canal heading north. A further 3 locks on and through the reserved area for the historic boats, past Town Wharf and where the floating market would be, past the 48 hour moorings and finally down through Big Lock in the rain before mooring shortly after.

Shortly after mooring up at Beeston we heard the whistle of a steam train, looking out it was actually the steam boat President with butty Kildare. 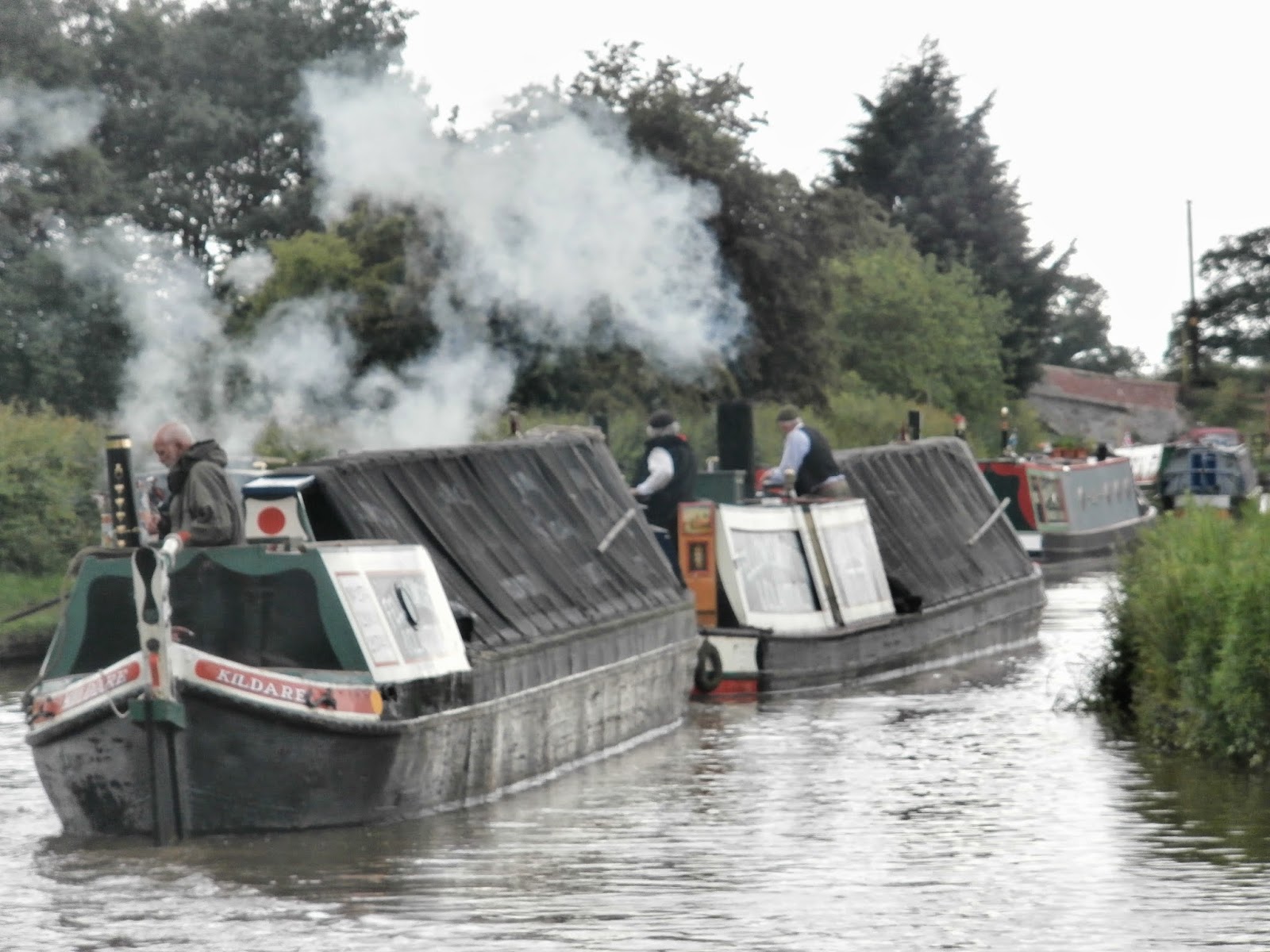 The following day we were busy collecting a new store of logs, James has noticed a huge bough of an Ash tree which had come down near Wharton's Lock it was too good an opportunity not to stop. James was out with the chain saw and cut off manageable rounds, which were hauled back to LJ and I chopped them into logs, while he was busy being creative. We now have another good supply of logs.

On Saturday (7th June) we set off again our mission at Beeston having been accomplished. It was back up through the Bunbury Staircase where we did the Bunbury Shuffle this time, LJ and an Anglo Welsh hire boat up and one down. We were just out of the locks when the heavens opened and we had a terrific thunder storm, no photos of the lightening as it was too wet to get the camera out. We stopped off for water in the downpour at Calveley, which has the unique feature of being an old wharf and undercover, it wasn't too long before the sun came out again.

At Barbridge Junction we did a left turn to head down the Middlewich Branch, it had turned into a lovely evening after the storms, stopping at Cholmondeston just after Bridge 4 and before Venetian Marina. 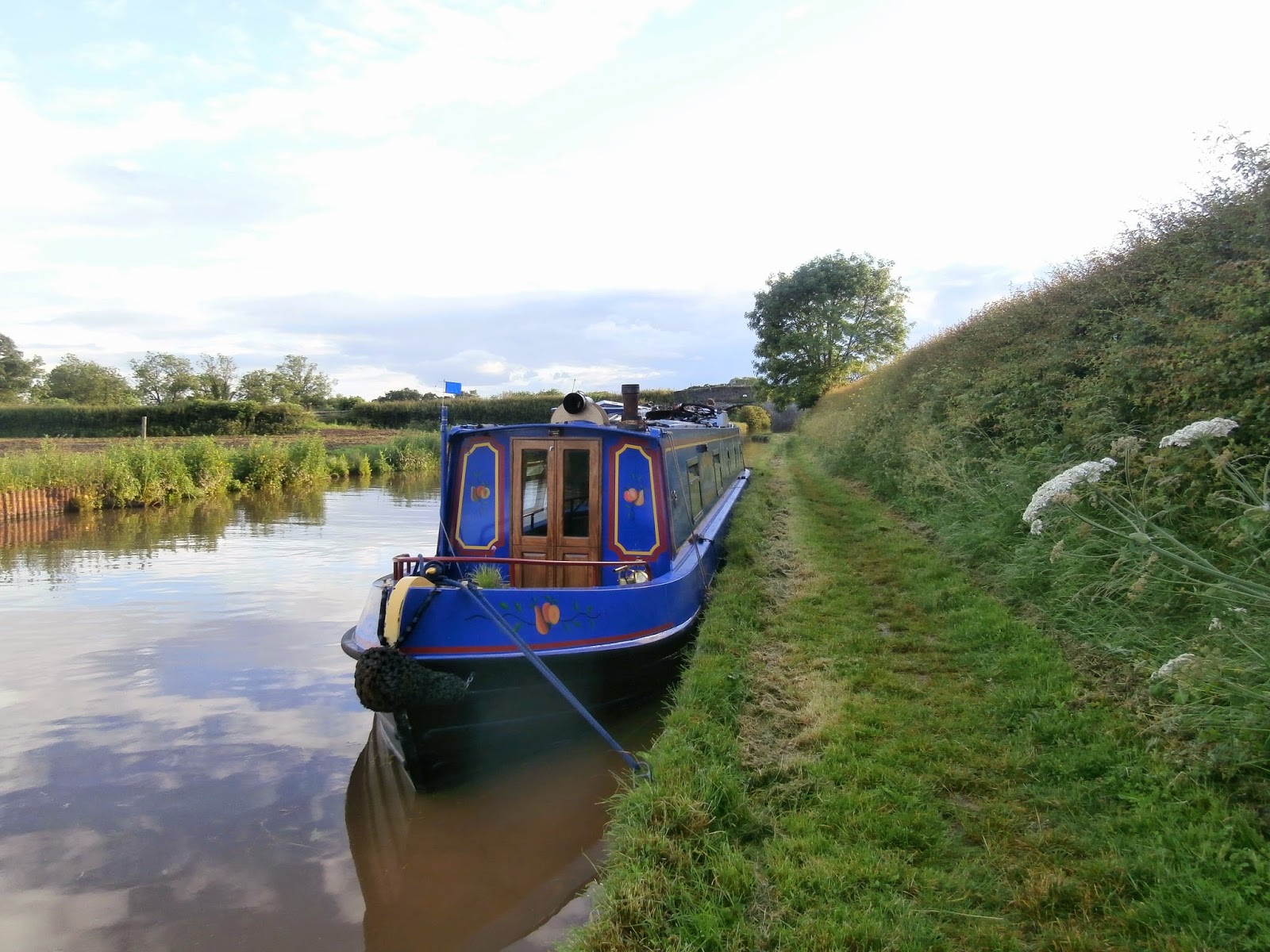