Well we're ready. All done. Just the last two hours or so cruising to do.

We've had some great times and made some fab memories on LJ since 2011 but its time to move on and get acquainted properly with Ernest.

Time to get boating and hopefully get the towpath shop back open and get pen making again.

At this point I was expecting to ask fellow bloggers to share the sales info far and wide but the listing went live at 9.30 Tuesday night and it was under offer by 10.30 the next morning and deposit in before lunchtime, we've agreed to get a few jobs done prior to survey time but it appears to be a done deal subject to survey.
So here endeth this Blog... To be continued shortly at The Pen Makers Journey
Posted by James at Tuesday, September 08, 2020 No comments:

After a pleasant trip through the tunnel we moored a few minutes later and got to the fettling and polishing.
The polytrol was hard graft, probably because the paintwork wasn't perfectly clean before we started. Instructions are for a thorough wash and 12 hours drying time, neither of which we had time for unfortunately. We managed to get side one finished just as we lost the sun and light and swapped from outside to inside to carry on dusting and polishing in there before we gave up for the night.

At a reasonable 8.30 ish on the morning of day 4 we pulled pins and headed for the Buckby flight. With a bit of deeper water under the hull (CRT must have dredged here) LJ flew along at a couple of hundred RPM over tickover. I really didn't need to pack so many "just in case" tools as I literally didn't open the bag.

What surprised me was the battery condition. We fitted the 125ah AGMs in November 2014 and lived with them off grid until April 2019 which in itself was fairly impressive. Then with seventeen months on charge via electric hook-up I expected a bit of positive grid corrosion would have just about finished them off allowing a few months learning curve for the new owners before they needed replacing. But they coped perfectly well with the fridge and inverter on most evenings for oven/charging etc we didn't use more than 10% of the 375Ah between 4.30pm stop and 8.30am leaving, which is pretty well spot on.

We shared locks with a very pleasant couple from Portsmouth way on their Gayton hire boat. They'd had their cruise through Russia cancelled, a subsequent trip to China cancelled, a Scottish canal trip cancelled and had to make do with a mid week break on the Grand (not really Grand at all) Union Canal.

The Buckby Flight seemed fairly well maintained so it didn't take too long to get down them and as Braunston no queues at all. It could have been fettled when the flight was unexpectedly closed recently for a fortnight to mend a blown cill.

We moored up opposite Whilton Marina where we first saw LJ in September 2011, we set about polishing the second side with aching arms and a little less enthusiasm before tackling the last of the inside. 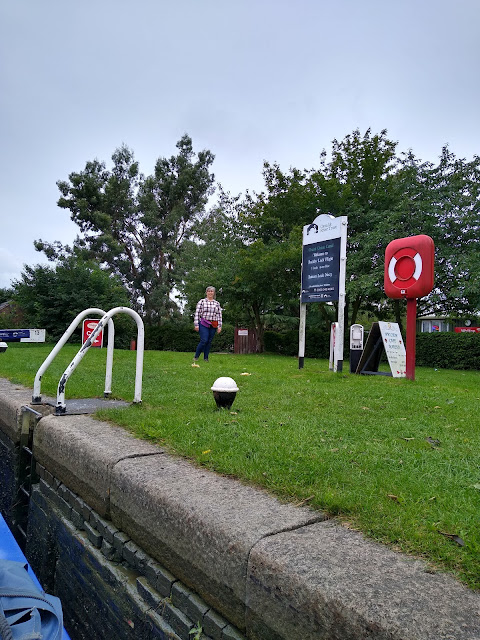 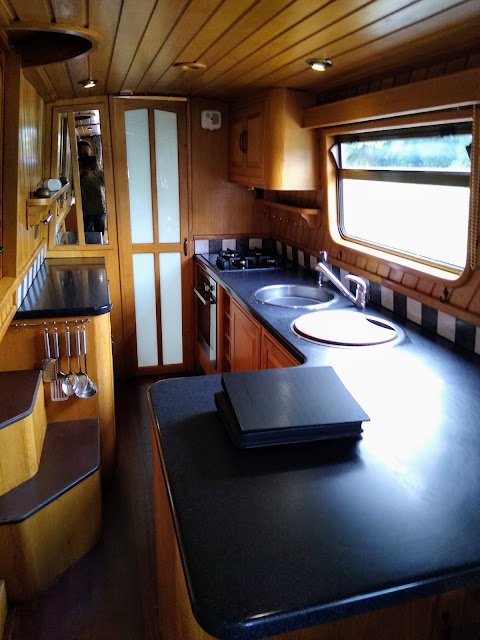 The last night's tree (branch) was cleared within a few hours and we we're able to make an earlyish start to Day 3 through Newbold, Rugby, Ansty and on to Braunston.

We needed to stop at Midland Chandlers for a few bits most importantly a tiller tube for Ernest. We'd planned on a stop today to get some polishing done if we could find somewhere not too busy. In the marina we spied a purchase we'd been meaning to get for a while some Polytrol oil which was meant to be the dogs danglies in the colour restorer and polishing world. The loose plan was Norton junction but its not may favourite stopover at the top of Buckby locks. Next to a dusty track and there's usually confusion as to who's moored and who's waiting for the locks.

It was a cracking day for cruising after the previous days storms and surprisingly it was quite quiet. Plenty of space in Braunston, no boat to share with on the Braunston flight and only one boat passed in the tunnel (our first and last on LJ) here's the blog from the first (Tunnel 1)
I don't know why but we've never stopped at the eastern end of Braunston tunnel and there's loads of space to moor and on a warm day the shade was welcome, so that's where we stopped for the evening and some serious polishing.

We passed a well named boat if Heidi the pirate ever changes from the Rum Wench (or is it Stiff Ripples now), and passed Chris and Karen's last boat Cardinal with it's JP3 in an engine room that Chris still misses 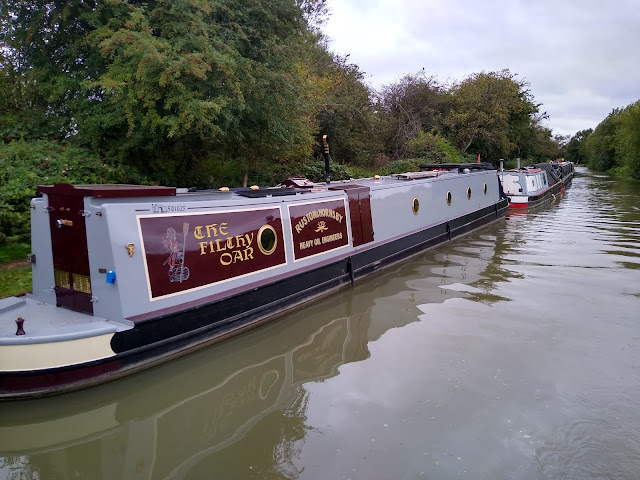 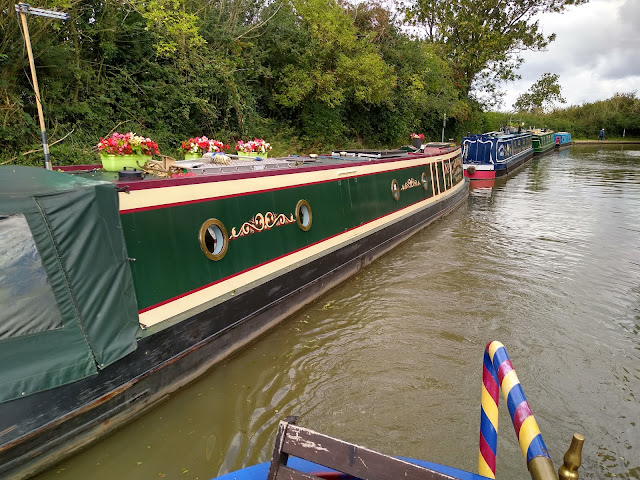 After a cracking day one neither of us we're looking forward to day two. The forecast was heavy rain from 6am with a chance of mere showers by noon but winds gusting 50mph by soon after that.
We delayed our start from close to the pump house at Sutton's Stop (Wiki) until mid morning but the rain was driving as I turned from the Cov to the Oxford (yes of course in one!) and through the stop to one of the fairly uninspiring stretches of canal through Ansty via some really dodgy moored boats and dangerous non maintenance from the navigation authority.

By lunchtime it was warmer, dryer and windier and the gusts were getting stronger.

We stopped for a bite to eat from our meagre rations in All Oaks Wood before heading off and battling the winds. There's no reason why we couldn't make the top of Hillmorton and have a reasonably early stop over today...

...Unless there's a tree down blocking the cut. Well it was more of a big branch rather than a tree but it was right across the cut by Armarder Boat Hire base and with nothing bigger than a bread knife aboard we'd have to sit it out with a dozen or so others.
Luckily it ha already been reported and it was cleared by CRT contractors just as it got dark so we'd only lost half a day due to that and poor weather.
Posted by James at Monday, September 07, 2020 No comments:

Well Ernest is far from finished but we have, due to COVID, stayed an extra 6 months and moved on with the next stages of fitting.

Predominantly fitting a solar array and getting the webasto central heating system up and running. More of that (possibly, on NB Ernest blog with a bit of a catch-up "how the build went"

We were lucky enough to have been offered a lift by Peter on his monday off to get the car shuffle sorted to Weedon, I no longer politely turn down offers but avert my gaze from the mouth of the gift horse and accept.

Peter wanted to (was under pressure from his family to) get an early start so a schedule was set at 8am for us to leave and a little later for him to follow on to give us time to sort the car out. In the interim few days we set about filling the workshop up with too many things that we really haven't got the need of nor space for. Second sort out next week methinks.

With Tuesday's forecast looking dire we decided that, if we could, we'd leave monday afternoon after sorting the car and packing a few bits to take on our final trip. Just a few essentials, some clothes, some beer and some tools. After all LJ has only been started once every other month and only been over to the service point across the canal twice in fifteen months so anything could happen.

We stemmed water briefly to say hi to Jim and Sheila and exchange some multicoloured strip lights that I'd advertised on FB marketplace that Jim wanted, for some dosh and coffee, probably the last time we'll see tham this year as they're heading for Llangollen (or the Welsh as it's also known)

After an early start we were pleased to get as far as Hawkesbury Junction. Our longest day's cruising for several years at about 8 hours.